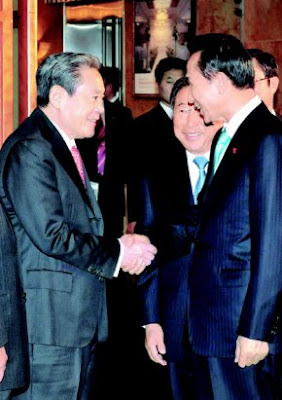 The Justice Ministry announced on Tuesday that it will be instating a special pardon for Lee Kun-hee, an International Olympic Committee member, on Jan 31. This is the first time under the constitutional order that a presidential pardon has been issued to a businessman as a single individual, and the first time a pardon has been issued at the end of the year, rather than on a national holiday or Memorial Day.

Lee Kun-hee is set to receive his pardon just four months after being sentenced to three years in prison, five years of probation and a 110 billion Won fine for malpractice and tax evasion. This is the second time Lee has been pardoned. In October of 1997, he was pardoned after being sentenced to two years in prison and three years of probation for involvement in the Roh Tae-woo slush fund scandal.

Announcing President Lee Myung-bak’s decision to grant a presidential pardon to the former Samsung Chairman, Justice Minister Lee Kwi-nam said the move was intended to improve chances for South Korea’s bid to host the 2018 Winter Olympic Games in Pyeongchang City. Minister Lee referred to this as a cherished national wish, and described how they were hoping the pardon would help Lee Kun-hee restore his IOC credentials, which are currently suspended.

During a cabinet meeting earlier that day, President Lee spoke about having received strong appeals from throughout the sports world, Gangwon region residents and the business sector that convey Lee Kun-hee’s activities are absolutely necessary in order for Pyeongchang to win its bid to host the Olympics in its third try. President Lee said that he based his decision regarding the presidential pardon on the interests of the country. According to Cheong Wa Dae (the presidential office in South Korea or Blue House) spokeswoman, Kim Eun-hye, President Lee also said it is imperative that Lee Kun-hee turn over a new leaf, contribute to South Korea’s standing in the international sports world and work to boost South Korea’s economic competitiveness.

Choi Gyo-il, director of the Justice Ministry’s Supreme Public Prosecutor’s Office, said the committee on presidential pardons convened on Dec 24, and that it seems most of the committee members, too, made a decision based on national interests. He also said while the Lee administration has sufficiently taken into consideration the fact that there could be public criticism over the law and principles, it considers Lee Kun-hee’s pardon a matter of national interest.

The Samsung Group welcomed the pardon and issued a brief unofficial statement expressing gratitude to the administration and the public. The Korea Chamber of Commerce, which had petitioned for Lee’s pardon, also welcomed the pardon, and said it expected Lee Kun-hee to both play an important role drawing the Winter Olympic Games to Pyeongchang, and contribute further to South Korea’s economic development.

Major civic groups, meanwhile, have been blasting the pardon and blame it for the collapse of the law. The People’s Solidarity for Participatory Democracy (PSPD) says the dignity of the nation and the fundamental democratic value of equality before the law have fallen. The civic groups expressed deep frustration that the former Samsung chairman has been treated as an absolute entity, a chaebol chief above the President himself. MINBYUN-Lawyers for a Democratic Society also says pardoning a convict who wrecked havoc on the economic order just four months into his sentence could not be justified for any reason, and call on the Lee administration to stop espousing legalism.

Please direct questions or comments to [englishhani@hani.co.kr]
Posted by NO Base Stories of Korea at 1:52 AM