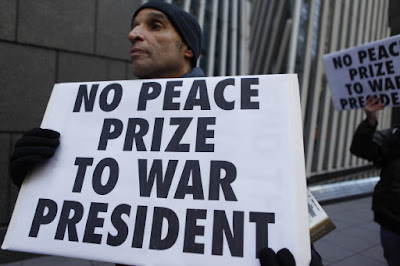 * Image source/caption: same as the belwo
'Protesters carry signs and march through Manhattan during a protest
against U.S. President Barack Obama’s acceptance of the Nobel Peace Prize
while presenting a justification for escalation in Afghanistan in New York City, Dec. 10 (REUTERS).'

Hankyoreh
S. Korea submits motion to redeploy troops to Afghanistan despite Taliban’s threat: As Koreans living in Afghanistan express concerns of possible retribution, the Defense Ministry announces the dispatch of an inspection team next week
Posted on : Dec.11,2009 12:33 KST

On Wednesday, one day after the Lee administration’s formal announcement of its plan for renewed deployments to Afghanistan, the Taliban issued a statement warning of “dire consequences.” The Defense Ministry in response is maintaining its plan to continue to push forward with deployment and submit an agreement plan to the National Assembly on Friday to redeploy armed forces to protect Provincial Reconstruction Team (PRT) units in Afghanistan.

In their warning statement, the Taliban says that the redeployment of South Korean forces is a breach of the promise South Korea made in 2007 when Korean Christian missionaries were abducted in Afghanistan to permanently withdraw forces from the country.

Lee Tae-ho, senior official of the People’s Solidarity for Participatory Democracy (PSPD), said, “South Korea finished its mission in Afghanistan in December 2007 and withdrew its troops, and it is unheard of for a country that withdrew its forces to send them back again.” Lee added, “There is no consensus among the people for troop redeployment.”

The Lee administration issued an official denial in response in which it said that it had never made the promise for permanent withdrawal during the 2007 negotiations for the release of the hostages. The statement stresses that the future deployments are for protecting South Korea’s PRTs, which have been sent to assist in reconstruction and restoration efforts following a resolution by the United Nations Security Council (UNSC) and the request of the Afghanistan government, and not combat troops for fighting the Taliban.

Even after the Taliban warning, the ruling Grand National Party (GNP) and Lee administration officials have been unanimous in declaring that there have been “no changes at all in the deployment plan.” Hwang Jin-ha, head of the GNP’s Second Policy Coordination Committee, said, “Intimidation tactics like this are both typical and commonplace of terrorist group maneuvers to block deployment that we were expecting.” Hwang added, “It is full-scale psychological warfare aimed at splitting public opinion just before the National Assembly attempts to pass the deployment agreement plan.”

Defense Ministry spokesman Won Tae-jae said, “The troops deployed will be stationed in relatively secure regions of Afghanistan and because we will have thorough security measures in place for their activity we foresee no major problems.” Next week, the Defense Ministry together with the Joint Chiefs of Staff plans to send an independent inspection team to Afghanistan to decide which weapons to send with the deployed troops.

Foreign Ministry Spokesman Moon Tae-young also says that necessary measures will be taken as the security measures for PRTs are strengthened. The ministry explained that South Korean residents in Afghanistan are taking security precautions through individual contacts and that businesses operating in the area on construction projects and the like have been holding security meetings to increase security.

Some who are actually living in Afghanistan, however, are expressing concern that the possibility of retribution from the Taliban has increased following the South Korean government’s announcement of its redeployment plan. The Samwhan Corp. Union, which is working on a highway project in Afghanistan, says that the project site has become “more dangerous” since the redeployment announcement. The company is working on laying asphalt for roads in seven locations in northern Afghanistan and there are currently some 100 Korean employees present there.

A representative from the Samwhan Corp. Union describes the situation as so difficult that it is impossible to even get through to the work site by telephone. The representative suggests, “The government needs to guarantee the safety of the workers facing the dangers of working in Afghanistan, and not simply assert that ‘it is secure.’”

Hankyoreh
Dispatching S. Korean troops to Afganistan made it on South Korea-U.S. summit‘s agenda:
LFP spokesperson reconfirms the fact after Cheong Wa Dae denies the exchange
Posted on : Jun.22,2009 12:42 KST
Posted by NO Base Stories of Korea at 5:03 PM