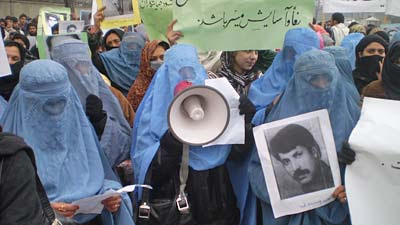 'Several hundred women, many carrying pictures of relatives they said were killed by Taliban militants or drug lords, took to the streets of Kabul to demand that President Hamid Karzai purge from his government anyone connected to the killing of Afghans. (Tony Perry / Los Angeles Times / December 10, 2009)'
Latimes.com
Afghan women lead protest against government corruption
:In an unusual display of female political activism, several hundred demonstrators demand that President Hamid Karzai purge those connected to corruption, war crimes or the Taliban.

Several hundred women, many holding aloft pictures of relatives killed by drug lords or Taliban militants, held a loud but nonviolent street protest today, demanding that President Hamid Karzai purge from his government anyone connected to corruption, war crimes or the Taliban.

"These women are being very brave," said the protest leader, her face hidden by a burka. "To be a woman in Afghanistan and an activist can mean death. We want justice for our loved ones!"

Afghan police, in riot gear, monitored the rally as it worked its way slowly through muddy streets to the United Nations building here, but they did nothing to disrupt the event.

The unusual display of political activism by women comes as Karzai is under increasing pressure to remove from his Cabinet anyone connected to rampant corruption, including links to the flourishing drug trade. His own finance minister says corruption is the biggest threat to the future of Afghanistan.

Karzai, elected to a second term in a vote marred by ballot-stuffing, had been expected to announce his selections for Cabinet positions this week, but he delayed his announcement until next week.

Karzai declined to say who he will appoint but promised that his selections will satisfy the Afghan public and the international community.

The protest group, under the banner Social Assn. of Afghan Justice Seekers, said that "our people have gone into a nightmare of unbelieving" because of the disputed election and the fact that "the culture of impunity" still exists despite Karzai's vow to eliminate it.

While the women took the lead in the protest, about 500 men followed them in support, an unusual display in Afghan culture of men allowing women to take a leadership role.

The group spokeswoman, who gave her name as Lakifa, said many women are still afraid to demand an accounting of the death or disappearance of family members during the three decades of war that have ripped Afghanistan.

"We need to know about all of our martyrs, and the government needs to find the mass graves and the killers, not give them jobs and protect them," she said.

Although it was not a major focus of the protest, the group was also critical of President Obama's decision to send additional troops.

"The innocent and oppressed people will be the victims of American air and ground attacks," said the group's statement handed to Afghan and U.S. reporters.

Earlier this week, the Afghan Rights Monitor released a poll suggesting that half of Afghans think of the Karzai government as illegitimate because of the election fraud. The Cabinet selections, said the group's director, Ajmal Samadi, represent a "win or lose time" for Karzai.

"Mr. Karzai must urgently implement transformational reforms in all aspects of his government or accept grave consequences," Samadi said.