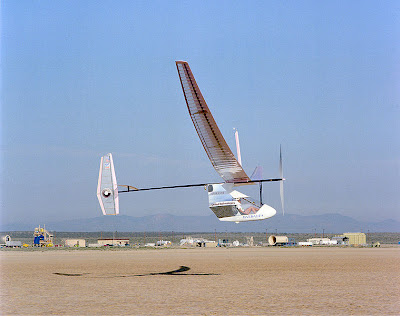 The "Sky Runner," designed and developed by a team of professors and researchers from the Korea Air Force Academy, managed to fly 150 and 100 meters in its two test flights last week, Lt. Col. Choi Seong-ok, who is overseeing the development, said.

"The flying distance was short, but it can be improved through further systematic pilot training," he said.

The propeller aircraft, which weighs just 40 kilograms but has a wingspan of 30 meters, is manned by a pilot who provides thrust by pedaling during take-off and flight, Choi said.

The pilot is required to pedal to generate some 0.3 horsepower to stay in the air for up to two kilometers, he said.

Only four nations in the world, the United States, Britain, Japan and Germany, have succeeded in developing HPAs.

The U.S.-made HPA, Daedalus, has the world records for distance and duration for human-powered airplanes. The plane built by Massachusetts Institute of Technology flew 74 miles (119 kilometers) in 1988 from Irakilon Air Force Base on Crete, Greece, crashing into the sea just short of the island of Santorini in three hours and 54 minutes.