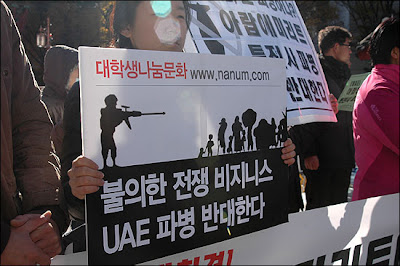 An unjust war business,
No dispatch to the UAE!
(University Students, Sharing Culture) 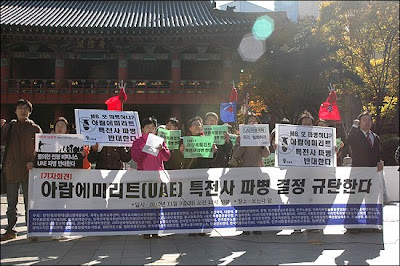 There have been raised lots of suspicions on the military cooperation including contract size and dispatch since the Lee Myung-Bak government received the contract on nuclear power plant from the UAE. Nevertheless the government has never made public any information on it. The Lee government who has constantly denied the suspicion of whether it has promised dispatch on condition of export of nuclear power plant, has in fact driven the dispatch [plan] long time ago. We cannot but strongly denounce the Lee Myung Bak government who comes out for dispatch to export nuclear power plant and show off its military power, after it has enforced redeployment to Afghanistan and sent troops to the Gulf of Aden, Somalia, the region of ‘the 2nd war on terror.’

The Ministry of National Defense is packing [the plan] of dispatching special warfare force to the UAE, saying it is the “troop-dispatch by a new concept” for the troop deployment to the region of ‘non combat danger but safe.’ Different from the saying of the Ministry of National Defense, the UAE is an unstable region where the threats of terrors still remain. According to the safety travel information by the Ministry of Foreign Trade Department, the nations such as the United States, Britain, Canada and Australia is classifying the UAE as the nation of danger with high-level terror possibilities. Moreover, the dispatched special warfare force can be wrapped in armed conflicts because it could have battles in case of emergencies.

Also, the plan to dispatch special warfare force to the UAE is a joint production work from the interests of the both of the military authority that has constantly sought the overseas export of military power that has become corpulent, while it has made white paper of all the plans on the reduction of military force and of the military service term; and of the Lee Myung Bak government that understands troop dispatch as the creation of overseas market. The Lee Myung Bak government has announced that it would consider even dispatch if that is helpful for the arms export, with an aim of South Korea being the 7th arms export country. That is why we are so deeply concerned about [the prospect of] whether [South Korea] would actively dispatch troops to the nations classified as ‘non-conflict region’, by the momentum of dispatch to the UAE or not.

The government and Grand National Party are betraying their people, saying the dispatch of special warfare troops to the UAE is for ‘national interest.’ We cannot but ask: What the hell of which people’s interest the Lee Myung Bak government is saying under the [pretext] of ‘national interest’!” In the meantime, the South Korean governments’ dispatch policies have made insecure not only the dispatched soldiers but also their people. Because of the dispatch by the [Roh Moo Hyun] government who prioritized ‘national interest,’ Mr. Kim Sun-Il has lost his life in Iraq; sergeant Yoon Jang-Ho and Mr. Bae Hyung-Gyu, and Mr. Sim Sung-Min have lost their lives in Afghanistan. As the recent incident of the oil pipe line explosion in Yemen shows, the safety of the nuclear power plant that the South Korea has gotten contract and of the [would-be] dispatched troops can never be assured, different from the government claim.

Nonetheless, the Lee Myung-Bak government is enforcing the ‘don’t ask’ dispatch to the UAE, forcefully closing their people's eyes and ears again? The South Korean military does not exist for the price of receiving contract on nuclear power plant. It is of no basis to dispatch troops in the region of non-armed conflicts. The plan of dispatching special warfare troops without collecting people’s opinions to the UAE should be immediately withdrawn. We also strongly demand the government to made public all the information on the process of receiving contract on nuclear power plant, before it recklessly denies all the suspicions that the government must have promised troop-dispatch as the price of receiving contract [from the UAE].

- Immediately withdraw the basis-less plan to dispatch special warfare force to the UAE!
- Make public all the contents on the process of receiving contract on nuclear power plant and military cooperation!