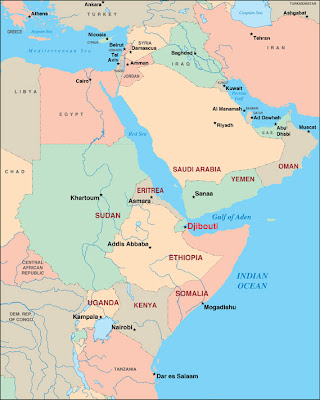 * Image source: google: 'Djibouti' (Getting Around: US Navy Ports of Call)
Stop NATO

The Democratic Party of Japan-led government is constructing a large military
facility in Djibouti, the first Self-Defense Forces’ base abroad "to counter
piracy in the waters off Somalia in East Africa", Akahata reporterd.

In June 2009, the government dispatched a Maritime Self-Defense Force (MSDF)
unit, including two P3C patrol aircraft and 150 MSDF servicemen, to Djibouti.
Along with two destroyers which were sent in 2008, the unit is taking part in
anti-piracy missions in the Gulf of Aden. At present, the MSDF unit uses the
U.S. base next to the Djibouti International Airport as a foothold for its
activities, according to the paper.

Akahata added that "after signing a lease on the land with the Djibouti
government, the Japanese government in July began building a MSDF facility in
the north-west zone of the airport as its new base of operations."

The government’s response states that "by using 4.7 billion yen in tax money,
the government plans to construct a 12 hectare facility which includes housing
units, hangers, and an office building. The facility will also have an aircraft
apron which can hold three aircraft and will be completed in March 2011."

Akamine criticized the MSDF’s new facility currently under construction in
Djibouti as being a “genuine military base” and said, “Constructing such a
facility enables the Self-Defense Forces to possess a permanent base abroad for
the first time since the war’s end. It is a matter of extreme importance
concerning abiding by the Japanese Constitution.”