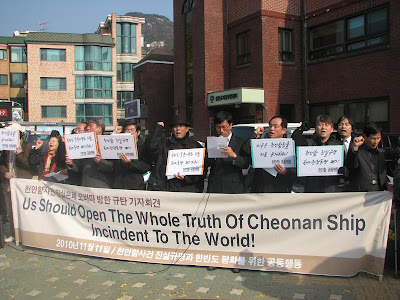 * Image source: Joint Action Committee for the Examination on the Truth of the Cheonan Ship Incident and for Peace in the Korean Peninsula, 천안함사건 진실규명과 한반도 평화를 위한 공동행동 Nov. 11, 2010

* The below is an arbitrary translation of an original Korean statement by the Joint Action Committee for the Examination on the Truth of the Cheonan Ship Incident and for Peace in the Korean Peninsula* for the press interview on Nov. 11 when the G20 summits had a meeting in Seoul. The statement appeared in the sites of the above (click); Korean Alliance of Progressive Movements(click); and other websites. The translation was added on Nov. 14, 2010.

Obama, President of the United States
should open all the materials related to the Cheonan Ship incident and
should not deny people’s demand of truth examination on that any more!!
It is told that Lee Myung-Bak, President [of ROK] and Obama, President of the United States would announce the direction of the following handling such as the drive for the congress ratification agreement on the ROK-US FTA, through their summit meeting in the Presidential House and joint press interview today (Nov. 11).

Upon the United States President Obama’s visit to South Korea [during the G20], ‘ The Joint Action Committee for the Examination on the Truth of the Cheonan Ship Incident and for Peace in the Korean Peninsula’ strongly criticizing the behavior of President Obama who has neglected the demands by the people and conscientious force in the domestic and overseas who have tried to examine the truth of the Cheonan ship incident, rigorously warns him not to turn away from those any more.

Even though the President Obama and President Lee Myung Bak had so closely cooperated each other, the presidential statement of the UN Security Council did not contain the content on ‘attack from North Korea.’ As even the former US ambassador to South Korea, Gregg has said there was a possibility of [underwater] mine as mentioned in the ‘Russia report’ for the reason of the incident of the sunken Cheonan ship, the claim of North Korean torpedo attack is neither being trusted by the domestic nor by the overseas. There has even been a poll that tells near 70% of the South Koreans don’t believe in the ROK and US governments’ claim that says the cause of the sunken Cheonan ship incident was because of North Korean torpedo attack. Without the examination of truth, 46 [deceased] Cheonan ship soldiers cannot peacefully close their eyes. Also for the realization of peace in the Korean peninsula, the truth has to be examined. From those points, we urge Obama, President of the United States, to responsibly answer on our demands.

Second, all the material related to the sunken Cheonan ship has to be made public! Even up to now, most of the information related to the Cheonan ship incident is hidden and not being made public. The radar screen of the Korean Naval Tactics Data System (KNTDS) had been directly connected to the US air force and navy. In addition to that, the Blue Ridge, the commanding ship of the 7th fleet was participating and that military vessel had been connected to the surveillance and reconnaissance system of the ROK military during the ROK-US Key Resolve/ Foal Eagle Exercise. Thus, the United States was grasping the situation of the sea area of the incident, in real time.

As soon as the Cheonan ship incident happened, the U. S. authority announced that, “There is no basis to be declared as it was the deed of North Korea. [We] do not know the elements beside those of the naval vessel itself.” Such position proves that the United States was grasping the situation of [the Cheonan ship] sinking at the time.

Therefore the United States should open all the entire information related to the sinking [of the ship], such as the KNTDS radar screen, Thermal Observation Device (TOD) screen and surveillance & reconnaissance material etc.

Third, the United States should reveal what relationship there was between her and the death of the deceased warrant officer, Han Joon-Ho, who died not at the sunken bow & stern site but at the third site.

During the funeral of the warrant officer, Han Joon-Ho, the commander of the United Forces of Korea, Walter Sharp, directly expressed condolence himself for Han and encouraged Han’s bereaved families. Kathleen Stevens, the United States ambassador to South Korea, running to the site of salvaging Cheonan ship, encouraged soldiers who were doing the search works. And on April 27, a mourning flag was raised in the building of the United States embassy, [Seoul]. Such series of the happenings were the unusual that could never been seen in South Korea and it was more abnormal that media reported that the U. S. President, Obama calling the President Lee Myung Bak, said, “I am praying for the bereaved families of the deceased warrant officer, Han Joon-Ho who died during search works.”

- The United States should acknowledge that the Cheonan ship has joined the ROK-US joint [war] exercise of the Key Resolve/ Foal Eagle that has been practiced under the command and control by the Commander of the 7th fleet; and should concretely reveal with what operation(s) and how she was carrying out those!

- The United States is having not only her own satellite(s) and war vessel(s)but also KNTDS, communication material, and TOD, provided with the information by the South Korean military. The United States should immediately open all the entire body of information related to the sinking of the Cheonan ship.

The Joint Action Committee for the Examination on the Truth of the Cheonan Ship Incident and for Peace in the Korean Peninsula*:

Posted by NO Base Stories of Korea at 4:19 AM