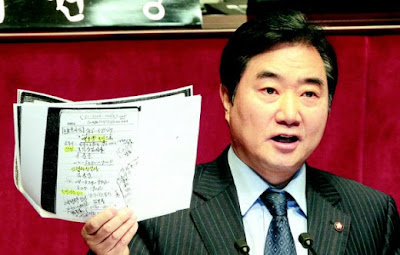 * Image & caption source: same as the link
Democratic Party Lawmaker Lee Seok-hyeon reveals a copy of a notebook from a police officer dispatched to the Public Ethics Office of the Office of the Prime Minister who participated in illegal surveillance of civilians at the National Assembly Committee of Budget and Accounts, Nov. 17. (Photo by Kim Gyoung-ho)

A confirmed memo by a police superintendent has led to allegations that the Public Ethics Office of the Prime Minister’s Office, which conducted illegal surveillance of civilians including Kim Jong-ik, may have carried out surveillance of other civilians including such as singers and entertainment management officials. Recent allegations say that a National Intelligence Service (NIS) official, who was dispatched to the Cheong Wa Dae (the presidential office in South Korea or Blue House) and the Public Ethnics Office, conducted illegal surveillance of then-NIS Director Kim Sung-ho and ruling and opposition party politicians including then-Democratic Party (DP) Chairman Chung Se-kyun and Grand National Party (GNP) Lawmaker Lee Sung-hun.

During a meeting of the Special Committee on Budgets and Accounts on Wednesday, Democratic Party Lawmaker Lee Seok-hyun said in a policy inquiry, “An important discovery was made in the notebook of Gyeonggi Police Superintendent Kwon Jung-gi, who was dispatched to the Public Ethics Office and was punished on charges of concealing evidence regarding the illegal surveillance.” Lee went on to say, “In a memo written during a meeting at 10 a.m. on July 8, just after the investigation into the surveillance had been ordered, Kwon wrote that surveillance had also been conducted on an entertainment management company and a trot singer.”

READ MORE
Posted by NO Base Stories of Korea at 1:10 AM