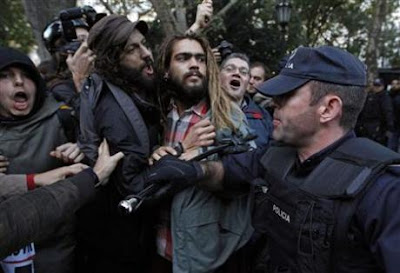 LISBON: Portuguese police detained 42 anti-NATO protesters who blocked a road near the military alliance's summit venue in Lisbon on Saturday.

"They are detained for identification. It was an action of civil disobedience. they were blocking an avenue leading toward the venue. There was no violence," a police spokesman said.

Security was tight for the two-day NATO summit and protests by Saturday afternoon were peaceful and small.

Campaigners from Portugal, other European countries and Canada said in a statement: "We are using civil disobedience to highlight the violence committed by NATO in Afghanistan. They are meeting here today to perfect their arsenal of destruction."

Security forces have also barred more than 200 people from entering Portugal since Tuesday, when they revived border checks on the frontier with EU partner Spain for the first time since 2004 to prevent violence during the summit.

In April 2009, hundreds of youths rioted in the eastern French city of Strasbourg, setting fire to buildings as NATO marked its 60th anniversary.