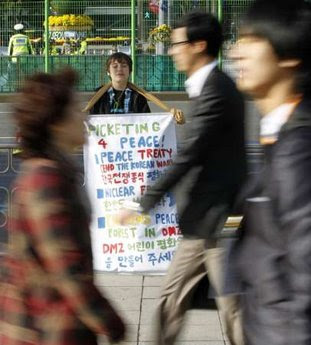 * Image source: Yahoo News
'People walk past as Jonathan Lee, a Korean-American from Mississippi, stages a one-man protest near the venue of the G20 Summit in Seoul November 12, 2010. The teenage American boy travelled to North Korea last August with a letter asking North Korean leader Kim Jong-il to allow the creation of a peace forest which would grow over the heavily armed demilitarised zone separating the two Koreas.(REUTERS/Lee Jae-Won)' * Image source: Solidarity for Peace And Reunification of Korea 평통사 국문 클릭(original source: Yonhap News)
A remarkable boy, Jonathan Lee(13) had a press interview on Nov. 10, stating his will to do a one man protest, 7hours in each day of Nov. 11 and 12. The slogan is the both Koreas and United States should make a peace agreement , end the war and form a children peace forest inside the DMZ.
For more on his protest and speech during Nov. 11 to 12, see the videos below.

Posted by NO Base Stories of Korea at 4:55 AM