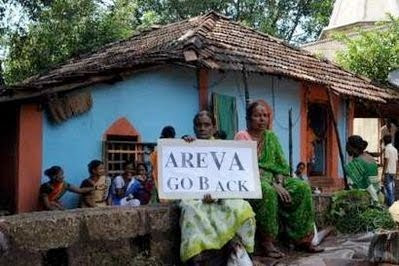 Hundreds of people were arrested October 29, protesting the Jaitapur Nuclear Power Project (JNPP) on India’s west coast. The project is the crown jewel of the U.S./India nuclear partnership, and, if realized, it would be the world’s largest nuclear energy park.

Six huge French-designed reactors producing 10,000 MW of electricity for Mumbai and Goa would displace thousands of village farmers and fishers. Compensation payments for the targeted villagers have been refused en masse, and in October a large police escort kept locals from confronting a visiting committee of site-selection experts. When a regional government official declared that locals did not oppose the project and outside instigators were at work, the people’s organization Janhit Seva Samiti called for a satyagraha action October 29 in remote Madban Village, at the heart of the area coveted by the JNPP. Warrants were issued for the arrest of Janhit Seva Samiti leaders, and some were detained while others went underground.

On the day of the action, police from three districts were mobilized to block roads and enforce an emergency closure of the area. They were outnumbered by more than 3,000 villagers who walked jungle paths or arrived by sea to pack the village temple and peacefully defy the orders. Some held placards declaring “Areva, Go Back,” “Sarkozy, Go Back” and “Obama, Go Back.”

Police had arrested 800 people before begging Janhit Seva Samiti leaders to stop a protest that had overwhelmed their capacity to arrest and transport people to a detention center 15 miles away. Those in custody were released that evening.

Vivek Monteiro, who attended the demonstration, wrote about it here.
Posted by NO Base Stories of Korea at 6:14 AM