Text Fwd: [Translation] [SPARK Statement] denunciation against Minister Kim's remark on his examination on the redeployment of tactical nuclear weapon 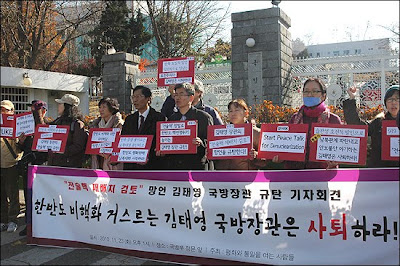 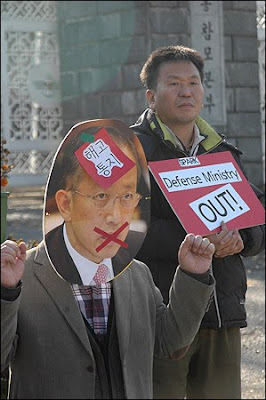 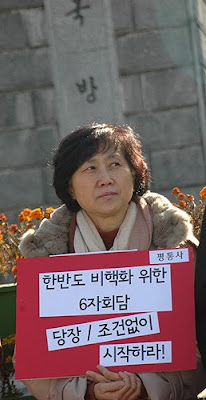 Press Interview to denounce Kim Tae-Young,
Ministry of National Defense,
who made an absurd remarks on the “examination
on the redeployment of tactical nuclear weapons”
and counters against non-nuclearization of the Korean peninsula!

We strongly denounce the absurd remarks by the Minister of Kim Tae-Young who tramples down the joint declaration on the non-nuclearization of the Korean Peninsula and Sept. 9 joint statement.

During the audit by the Committee on Budget and Accounts, National Assembly [on Nov. 22], Kim Tae-Young, Minister of National Defense said he “would examine on the deployment of the United States’ tactical nuclear weapons” in Extended Deterrence Committee [agreed on 42nd Security Consultative Meeting. For more on it, click HERE]

There is no basis to judge that she has gone beyond the scope of her ‘right to peaceful use of nuclear’ mentioned in Sept. 19 joint statement in the legal and technological senses in the current stage. Like another countries, the North Korea has the international legal right to build light water reactor. There could have been no spare for North Korea to just wait for the provision of light water reactor from other countries of the six-party, when the expectation on it has been difficult even though it was clearly stated in the Sept. 9 joint statement.

From the political and strategic aspect, the intention of North Korea who has made public of her uranium enrichment facilities can be told to urge the Obama administration that has only prolonged time without any measure, alleging ‘strategic endurance.’ In other words. It is her warning that, if the Obama government would not enter for the settlement of issue through dialogue, she could step toward her nuclear arming by uranium enrichment. If not such intention, there could have been no reason for her to purposely invite a nuclear scientist of the United States and make public of her uranium enrichment facility. Therefore since her essential intention is not in her nuclear arming, the issue of nuclear in the Korean peninsula is the matter that could be solved without limit if [the North Korea and United States] accept the demands each other by resuming the NK-US talks and six party talks. The verbal remark by Siegfried Hecker, Director of the Center for International Security and Cooperation of Stanford University, who is told to have said that “there would be no non-nuclearization of Korean peninsula without basic change of the NK-US relationship," means [North Korea] can realize the non-nuclearization of Korean peninsula if the United States withdraws from her hostile North Korean policy, in other words.

Seeing in that context, the remark by Kim Tae-Young, Ministry of National Defense, on his ‘examination on the redeployment of tactical nuclear weapons’ is a reckless one confrontational against North Korea, more aggravating the nuclear issue in the Korean peninsula but not solving it. While the North Korea has only made public open her uranium enrichment facilities, having her right supported by international law, it is enormously excessive and irrational that he says such and such on the redeployment of tactical nuclear weapons. [His saying] not only deviates from the joint declaration on the non-nuclearization of the Korean peninsula and 9.19 joint statement, but pours over cold water onto the political situation that is demanded of the resumption of the six party talks for the non-nuclearization of Korean peninsula. If the remark by the Ministry Kim is realized, the security of the Korean peninsula and North East Asia would be more dangerous with the non-nuclearization of Korean peninsula becoming [impossible], the nuclear domino situation being staged in the North East Asia, and the danger of nuclear war being heightened.

We strongly denouncing Kim Tae-Young, Ministry of National Defense, who makes routine of absurd remarks confrontational against North Korea and countering against the non-nuclearization of the Korean Peninsula, demand the resignation of the Minister Kim who makes dangerous of security.

Otherwise, it seems that there is an expedient judgment working , that is intended to weaken the people’s voice of distrust and criticism being poured onto himself and the Ministry of National Defense, because of its concealment and manipulation on the Cheonan ship incident, successive incidents and irrationality within military, by drawing the support by the bellicose power who is against North Korea and wishes the redeployment of the nuclear weapon of the United States [in the Korean peninsula] or nuclear arming of South Korea.

The authorities of the ROK and United States should promptly enter for the NK-US talks, four party peace forum and six party talks for the non-nuclearization of the Korean Peninsula and conclusion of peace agreement!

North Korean’s making public of her uranium enrichment facilities means the lines of ‘strategic endurance’ by the Obama administration and ‘non-nuclearization first’ and ‘apology first on the Cheonan ship incident’ by the Lee Myung Bak administration have become totally failed. A situation in which sanction is not effective and North Korean nuclear ability is being strengthened as time goes-not desired by the authorities of the United States. That is the situation that we have constantly claimed; sanction and oppression rather aggravates the states of things; and time is not in the side of the authorities of the ROK and United States.

The authorities of South Korea, United States and Japan are told to have decided the measure to demand the stop of the uranium enrichment to North Korea for the premise of the resumption of the six party talks, after their going through an emergency discussion related to the opening of uranium enrichment facility by North Korea. It means that while they self-acknowledge that the conditions that they have claimed in the past have failed while revealed their embarrassing situation and limit, by putting a new condition again on the other hand.

Director, Hecker has said, “It is clear that waiting patiently for Pyeongyang to return to the six party talks on terms acceptable to the United States and it allies will exacerbate the problem. A military attack is out of the question. Tightening sanctions further is likewise a dead end…The only hope appears to be engagement.”

We demand the ROK and US authorities to stop their unmeaning behaviors of continuing sanction and oppression with taking pre-condition for talks, following the advice by the director Hecker. We demand the authorities of the ROK and United States to promptly start various kinds of talks and negotiation on the NK-US talks, four party talks (South Korea, North Korea, United States and China), peace forum, six party talks and to contribute to the permanent peace in the Korean peninsula and North East Asia.

Solidarity for Peace And Reunification of Korea
/ press interview participants

SH_Yongbyonreport.pdf
122K View Download
Posted by NO Base Stories of Korea at 12:22 AM