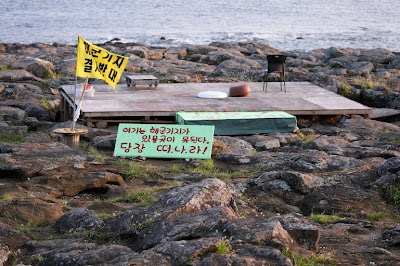 The [Jeju Island] governor, Woo Geun-Min has stepped forward by actively driving for a naval base [in Gangjeong]. He concluded that the issue of the Gangjeong naval base is the matter that could be solved if only an appropriate compensation follows to it. Will the Gangjeong villagers’ bloody-bruised heart be possibly solved by that? And could the Island people who watch it be persuaded by that?

There are six [South Korean] people’ duties. Those are: The Duty for defense, duty for tax, duty for education, duty for labor, duty for nature-protection, and duty for public welfare. Have the Gangjeong villagers disregarded or breached any one of them? All of them have been in the military*, received an elementary education; and have lived by paying tax without fail as if to feel that if they don’t even once, the sky would be fallen down toward them, while sweating by making paddy fields as their friends. They got punishment from 1 & half years’ prison term with three years’ probation at most to the fine of 2,000,000 won (* about $ 1,800) at least, only for the reason that they had staged the opposition movement against naval base [plan], for the protection of nature environment and for the public welfare of the whole region’s villagers. They had to hear even scolding that they were lack of patriotism toward nation during a reciting of the court decision statement. Since the Republic of Korea is swarmed with many statesmen who have been exempted or avoided the military service, the treatment for the Gangjeong villagers are felt so sad.

* Every man in South Korea except for some exceptions are obliged to take military service for two and half years.

Even though the Constitution should be the basis of all the laws and the supreme law, the statesmen often tend to oppress people’s rights by making front of the security-related laws and development law. They emphasize only the security of nation while turning away from the danger of the naval base, if it is constructed, that would only jeopardize the political situation of the North East Asia and provoke arms race. It is the time when serious agonies and discussions of whether the way to succeed in an endless arms race is the only way to secure the security of nation.

One more thing that we should earnestly agonize is that thanks to the blessed nature of the Jeju Island, the Island has gotten the honorable name of the so called the world natural heritage; listed as the world geological park ; and there has been the efforts to include it as one of the seven world wonders. Such efforts would become a firm stepping stone that the Jeju Island could be spotlighted as a global tourism site and would be provided with an advantageous point that it could invite all kinds of world institutions. There is a possibility waiting that we can establish an international peace network that carries out the function as an Island of Peace in name and reality together. However, [what we should remind is that] the result of such effort would bear the new possibility of military neutral zone and nature protection.

나도 눈을 뜨고 천지를 보았다.
I opened my eyes and looked at the sky and earth, too.