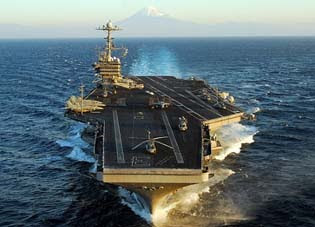 SEOUL: The U.S. Navy's nuclear-powered aircraft carrier George Washington set off for the volatile waters west of the Korean peninsula Nov. 24 to join a naval readiness exercise with South Korean forces, the Combined Forces Command (CFC) here announced, in an apparent show of strength against North Korea, which shelled an island of the South, killing two marines and two other civilians a day ago.

The participation of the U.S. aircraft carrier strike group, which includes 75 aircraft and 6,000 sailors, was agreed upon by U.S. and South Korean leaders, according to the presidential offices in both countries.

President Barack Obama talked with his South Korean counterpart, Lee Myung-bak, for 30 minutes by phone and decided to dispatch the 97,000-ton aircraft carrier from the U.S. 7th Fleet, according to the White House. The carrier strike group left its home base in Yokosuka, Japan, for the West Sea to take part in drills Nov. 28-Dec.1.

"The United States stands shoulder to shoulder with our close friend and ally," Obama told Lee, according to a White House statement.

The CFC, led by Gen. Walter Sharp, issued a statement announcing the naval exercise is "defensive in nature."

"While planned well before yesterday's unprovoked artillery attack, it demonstrates the strength of the ROK (Republic of Korea)-U.S. alliance and our commitment to regional stability through deterrence. It is also designed to improve our military interoperability," said the statement.

Along with the George Washington and its embarked carrier air wing, the statement said U.S. Navy ships scheduled to participate include the guided-missile cruiser Cowpens and the guided-missile destroyers Stethem, Fitzgerald and Lassen.

CFC public affairs official Kim Yong-kyu said the U.S. government had notified China of the exercise plan. China has been opposed to U.S.-ROK joint maneuvers in the West Sea, or Yellow Sea, most of which it considers to be its territory.

Seoul's Joint Chiefs of Staff said the ROK Navy will deploy destroyers, corvettes, frigates, support ships and anti-submarine aircraft without specifying how many troops or what type of ships would be involved in the four-day exercise.
....
In July, about 8,000 U.S. and South Korean forces, 20 ships and submarines and 200 aircraft took part in the "Invincible Spirit" exercise, the first of a series of war games held in response to the Cheonan sinking.
....
The UNC will investigate the incident as part of its responsibility to maintain the Armistice Agreement and will determine any violations, he said, calling for holding of general officer-level talks with the North Korean People's Army in order to initiate an exchange of information and de-escalate the situation.
....
===========================
Stop NATO
Blog site
Posted by NO Base Stories of Korea at 8:55 AM