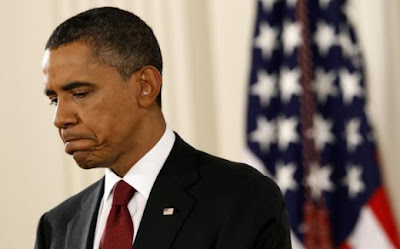 * Image source: same as the link
U.S. President Barack Obama wears a troubled expression as he holds a news conference after the Democratic Party’s midterm elections defeat at the White House, Nov. 3. (Reuters Yonhap)
Hankyoreh
U.S. to request broad changes to KORUS FTA Some ruling party lawmakers have joined the opposition’s criticism of the Lee administration’s decision to formalize renegotiations
Posted on : Nov.20,2010

By Jung Eun-joo and Seong Yeon-cheol

U.S. President Barack Obama declared his intention to examine demands from the U.S. Congress to modify provisions regarding labor, investment, and finance in renegotiations of the South Korea-U.S. Free Trade Agreement (KORUS FTA).

According to Reuters and Inside U.S. Trade, Obama expressed this position at a meeting in which nine Representatives from the U.S. Democratic Party’s Trade Working Group who are opposed to the KORUS FTA were summoned to the White House on Thursday (local time) and asked for their cooperation. Obama also told the Representatives that if they submitted a list of additional concerns, he would consider the items and pursue them during the negotiation process with South Korea, Maine Representative Mike Michaud reported.

Michaud and the other Representatives submitted a press release in which they asked Obama for protection of worker interests and reduction of offshore processing through stronger labor standards, a revival of U.S. manufacturing through mutualism, and expanded exports by small and medium enterprises (SMEs). They also requested U.S. economic security through a reduction in the trade deficit, the prevention of financial crisis, and a balance between consumption and production.

READ MORE
Posted by NO Base Stories of Korea at 7:34 AM