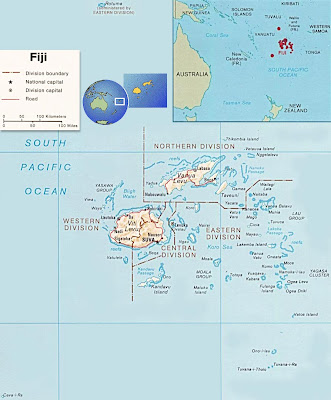 NZ Herald
US chooses Fiji for aid base in Pacific despite dictatorship
By Audrey Young
Nov 3, 2010

The United States has chosen Fiji as the site for its expansion of aid to the Pacific despite its military regime.

Behind the decision is a desire to counter Fiji's strong relationship with China.

Secretary of State Hillary Clinton made the announcement before her eight-country tour of the Asia-Pacific area. She is due in New Zealand tomorrow for talks in Wellington, and will go to Christchurch on Friday.

The US abandoned its Pacific aid post 15 years ago, leaving a gap that has been keenly filled by China, which is expanding its international influence through aid.

The US has publicly said for some time that it believes it was a mistake to turn its attention from the Pacific.

It had been considering other locations for its USAID base, including Honiara in the Solomons.

But because of the strengthening relationship between Fiji and China and the fact that Fiji is a hub for the Pacific, it chose Fiji.

The USAID hub will begin with a budget of $27.5 million specifically for climate change mitigation.

Her speech made it clear that the US intends to step up its engagement in the region on every front - development, military, bilateral relationships and regional organisations such as the East Asia Summit and Asean.

"The most common thing Asian leaders have said to me in my travels in this last 20 months is, 'Thank you, we're so glad you're playing an active role in Asia again'."

She said the Pentagon was engaged in a comprehensive "global posture review" - effectively a white paper that will set out the plan for the US military presence in the region.

That plan would have to become "more politically sustainable, operationally resilient, and geographically dispersed".
[..]

She also said: "We have created new parameters for military co-operation with New Zealand."

That refers to the more streamlined procedures for waiving the ban on exercising with New Zealand - a reprisal for the anti-nuclear legislation of 1986.

Mrs Clinton is visiting Vietnam, China, Cambodia, Malaysia, PNG, New Zealand, Australia, American Samoa. It is her sixth visit to the region in 20 months.
Posted by NO Base Stories of Korea at 1:35 AM