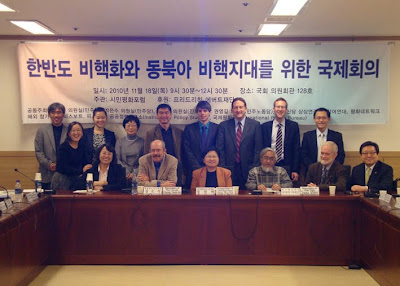 We are civil society activists and scholars from the United States, Japan, China, South Korea, and Europe, who work for peace and disarmament. We have just attended two international workshops to discuss ways to reduce military spending in the Asia-Pacific region and to build a denuclearized Korean Peninsula and a nuclear weapon-free zone in Northeast Asia.

On November 17th, People’s Solidarity for Participatory Democracy, The Center for Peace and Law of the Institute of Legal Studies of Inha University and Peace Network organized an international workshop called ‘Civil Society Control of the Security Sector’ as part of the Asia-Pacific Freeze, which is a campaign to reduce military spending in the region. The participants discussed the military strategies of the United States, China, Japan, and South Korea from the perspective of civil society. During the workshop, we recognized the fact that military spending has rapidly increased over last 10 years along with the rising military tension. Against this backdrop, we agreed on the need to review and reevaluate each government’s military strategy – particularly, its interpretation of ‘military threats’ and military plans in response – from a civilian position. In addition, we confirmed that some of the cases, in which the respective governments in Northeast Asia suggest the need for military preparation, could be peacefully managed by expanding mutual trust or building trust and civil society would play a vital role in that regard. We also discussed ways to cut military spending, which has been dramatically increasing, and to transfer the money for peaceful purposes and development at the governmental, regional and global levels while sharing available cases.

On November 18th, we held another workshop entitled ‘Denuclearization on the Korean Peninsula and a Nuclear Weapon-Free Zone in Northeast Asia’ co-sponsored by Civil Peace Forum and several lawmakers (Sunsook Park, Eunsoo Park, Younggil Kwon, and Seungsoo Cho). In the workshop, we agreed that the efforts to establish a nuclear weapons free zone in Northeast Asia should go hand in hand with the Six-Party Talks, which seeks to denuclearize North Korea and build the peace regime. We supported the activities to build the Northeast Asia Nuclear Weapon Free Zone by Korea-Japan Parliamentarian Network for Nuclear Non-proliferation and Disarmament. We also reached consensus on the need for the 3+3 agreement, which requires North and South Koreas and Japan to renounce their reliance on nuclear deterrence, and the neighboring countries such as the United States, Russia and China to guarantee the Negative Security Assurances, which is a promise that they will not impose nuclear threats, in return.

Based on such agreement and understanding, we make the following requests.

● In the Asia-Pacific region, Northeast Asia in particular, the role of eliminating the military tensions and hostility and further creating an order of permanent peace and co-existence can be played not only by governments. We believe parliaments, municipal governments, intellectuals, and civil society can each play a creative role. We expect the Korean National Assembly to serve as a bridge for peace dialogue by linking government, civil society and national levels.

● We urge the respective governments in the Asia-Pacific region to open the military and security policy-making process to guarantee its transparency and also to reform its system so that civil society can participate. The ultimate purpose of military and security policies is to provide the population with a secure life and it is not only appropriate but also necessary that the people participate in and intervene in the decision-making process to decide as priority to allocate its investment in securing.

● We pay attention to the fact that each government in the Asia-Pacific region tries to find the balance between fiscal health and the provision of social welfare when they introduce policies in response to the global economic crisis. We would like to emphasize that in order to prevent the deterioration of the fiscal health and ensure resources for necessary social welfare and development, it is the most reasonable method to freeze and reduce military spending.

● We believe that the 3+3 framework for NEA-NWFZ(Northeast Asia Nuclear Weapon Free Zone) can promote the vision of nuclear weapon free world in the region. We believe nuclear weapon states should adopt a 'no first use' policy, guarantee Negative Security Assurances(NSA) to non-nuclear weapon states not to threaten to attack or attack, and implement the nuclear disarmament and abolition. We hope the two Koreas and Japan should not develop, produce, possess or deploy any nuclear weapon, with commitments not to produce any fissionable materials.

● We hope the Six-Party Talks will be resumed as soon as possible, within the framework not only of North Korea’s nuclear dismantlement but also improvement of North Korea-Japan and North Korea-U.S. relations, which should be discussed along with an in-depth discussion on the vision to realize the peace region on the Korean Peninsula and in Northeast Asia.

● We believe that the Missile Defense system is used not as a defensive but as an offensive tool which may cause military tensions in Northeast Asia. We express our deep concern about the ‘Missile Defense’ initiative, which has been introduced into Northeast Asia and the West Pacific region.

● We believe that the discussion on denuclearizing the Korean Peninsula and Northeast Asia should go hand in hand with the efforts to decrease the threats of conventional weapons and eliminate the imbalance of military spending. This is because of the possibility that if a state recognizes its definite inferiority in conventional military power and spending, it is more likely to obtain nuclear weapons or missiles to ensure asymmetric power.

● We express our concern that recently military alliances have strengthened and military plans have turned more aggressive in Northeast Asia and the West Pacific region. In this regard, we urge the peaceful and multilateral resolution of conflicts in the region and also the development of peaceful policies and methods. We call on all parties in the region to promote dialogue over the territorial disputes in order not to escalate the recent tensions and to bring about peaceful settlement.

● We support dialogue and collaboration between the North and South Korea governments, business sector and civil society organizations at the all levels. We welcome the continuation of economic cooperation in the Gaesung industrial complex, despite tensions caused by the Cheonan Incident, and also the recent resumption of meetings of separated families between North and South Korea. We hope that such cooperation and collaboration will be continued and further developed.

● We believe the Japanese Peace Constitution has provided a great contribution to the peaceful rise of Northeast Asia and such initiatives should be continued. In addition, we urge all the countries in the Pacific region to actually implement the peace principles and standards suggested in their constitutions and various laws and policies.

● We express our condolences to the victims of the Cheonan Incident and the family members of the deceased. In addition, we pay our respect to the Korean government and foreign experts who tried to find the cause of the Cheonan ship. However, we recommend that the Korean government and National Assembly investigate and answer the additional questions regarding the incident, raised both domestically and internationally. Also, we expect that in order to carry out the reinvestigation effectively and provide firm credibility to the results, North Korea, China, Russia as well as the previously participating countries, should be invited to investigate/review the incident.