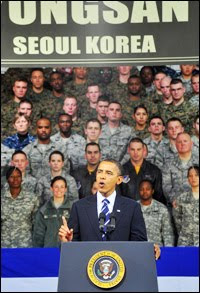 * Image & caption source: same as the link
U.S. President Barack Obama speaks to troops serving at the Yongsan military base in Seoul, Thursday. He urged North Korea to stop being provocative and take another path toward peace and prosperity. / Joint Press Corps


Obama arrived in Seoul Wednesday to attend the G20 Summit.

The day also marked Veterans’ Day in the U.S.

This was Obama’s second town hall meeting-like event with U.S. troops on the peninsula. He addressed troops at Osan Air Base during his visit to South Korea last November.

“Sixty years have come and gone since the communist armies first crossed the 38th parallel. Within three days, they had captured Seoul,” he said. “By the end of the next month, they had driven the Korean army all the way south, to Busan. And from where things stood in the summer of 1950, it didn’t appear that the Republic of Korea would survive much longer.

“Nearly 37,000 Americans would give their lives in Korea. But after three years of fighting, our forces finally succeeded in driving the invading armies back over the 38th parallel.”

The U.S. Commander-in-chief called on Pyongyang to take a different path of offering its people lives of growing opportunity instead of crushing poverty.
“The United States will never waver in our commitment to the security of the Republic of Korea,” he said. “The alliance between our two nations has never been stronger, and along the with the rest of the world, we have made it clear that North Korea’s continued pursuit of nuclear weapons will only lead to more isolation and less security.
“Today, the Korean peninsula provides the world’s clearest contrast between a society that is open and one that is closed; between a nation that is dynamic and growing, and a government that would rather starve its people than change,” Obama said. “It’s a contrast so stark you can see it from space, as the brilliant lights of Seoul give way to utter darkness in the north. This is not an accident of history. It is a direct result of the path that has been taken by North Korea ― a path of confrontation and provocation; one that includes the pursuit of nuclear weapons and the attack on the Cheonan last March.”

In the wake of this aggression, Pyongyang should not be taken for granted, he stressed.
gallantjung@koreatimes.co.kr
Posted by NO Base Stories of Korea at 1:56 AM