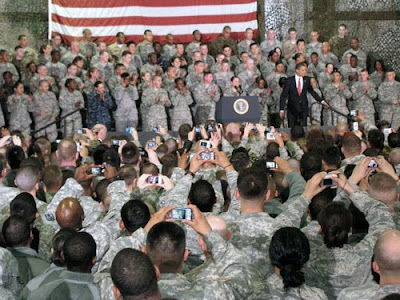 'U.S. service members at Osan take photos of President Barack Obama, who has just finished his speech to an audience drawn from installations around the peninsula.'
* Korea Times
11-20-2009 18:49
Obama Hints at Rotating Troops in South Korea to Afghanistan
By Jung Sung-ki, Staff Reporter

The remark was made Thursday when he spoke to thousands of U.S. troops here on the final day of his weeklong Asia tour. It came on the heels of the Oct. 22 comment by Admiral Mike Mullen, chairman of the U.S. Joint Chiefs of Staff, that the Pentagon could temporarily deploy U.S. service members in Korea to the Middle East in coming years.

Mullen referred to the soon-to-be-implemented longer, family-accompanied tours by U.S. troops in South Korea as a base for the idea.

Pundits say the comment by Obama can be construed as emphasizing ``strategic flexibility'' for U.S. Forces Korea (USFK) since the U.S. government is struggling to handle Afghan issues amid surging death tolls and withdrawals of non-U.S. troops from the terrorism-stricken Central Asian nation.

Strategic flexibility is aimed at changing the mission of American forces abroad from stationary ones focused on defending host nations to rapid deployment troops that can be swiftly dispatched to other parts of the world where the United States is in need.

Seoul and Washington already agreed on the scheme in 2006, but the plan has not been fully implemented amid concerns that it could weaken the Korea-U.S. combined forces against North Korea.

A high-ranking official at the ROK-U.S. Combined Forces Command confirmed the U.S. move.

``When the plan of longer, accompanied tours by U.S. troops here was initiated, the U.S. military was already considering the troop rotation scheme at the same time,'' the official told The Korea Times on condition of anonymity. ``Such a rotation is normal in other countries where U.S. troops are stationed, so South Korea should not be an exception as long as the tour normalization plan is settled in the coming years.''

Following approval from the Pentagon, the USFK, which has 28,500 troops in Korea, is going ahead with lengthening the tours of its service members here to up to three years and having them live with their family members.

USFK Commander General Walter Sharp said his command would have half of its 28,500 members serve three-year accompanied tours, similar to those served by soldiers, sailors, airmen and marines in Japan and Europe for decades.