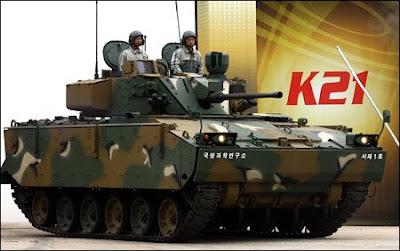 The K21 Infantry Fighting Vehicle (IFV) will be operational with the Army later this month, Doosan DST, the developer of the new armored vehicle said Friday.

The vehicle, jointly developed by the state-funded Agency for Defense Development, will serve as a core part of the Army's future mechanized divisions.

The K21 features better performances than the M2A3 of the U.S. Army and the Russian BMP-3 in firepower, mobility and survivability, the company said.

The 25-ton IFV has a 750-horsepower turbo-diesel engine and 40mm auto cannon capable of shooting down slow-moving helicopters and aircraft. It can engage in C4I warfare using digital communication, GPS receivers and inter-vehicle digital links, it said.

"We're proud that the K21 built with on our own technology will begin service with the Korean military," Eom Hang-seok, a representative of Doosan DST, said in a cermeony to mark the mass production of the K21 in Changwon, South Gyeongsang Province.

He also expected the vehicle to become one of the high-flying IFVs on the global market, given the K21's high performances and price competitiveness.

A fully-equipped K21 cost about 4 billion won ($3.4 million) — cheaper than the U.S.-built Bradely and Germany's Puma IFV, whose per-unit prices are estimated between $4 million and $4.5 million.

Doosan will produce a total of 166 units under the first phase contract. Under the Defense Reform 2020 initative, the Army plans to acquire a total of 466 K21 vehicles.

gallantjung@koreatimes.co.kr
Posted by NO Base Stories of Korea at 9:06 PM