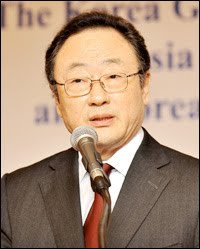 Seoul has been named as host of the G20 summit in November 2010, Cheong Wa Dae said Friday, citing its superior infrastructure over other candidate cities.

After Korea was named as a venue for the gathering of leaders from the world's 20 most advanced economies next year, Seoul, Incheon and Jeju had vied to host the event.

Cheong Wa Dae spokesman Park Seon-gyu said the G20 summit, the largest international event ever to be held in Korea, requires a large-scale convention center and lodging facilities, adding the government has no other choice but to make the best use of existing infrastructure with only 12 months left before the meeting.

"Seoul has many hotels and a convenient transportation network. Also, for security reasons, it is better prepared than other metropolises here. But gatherings of ministers and other government officials, as well as many sideline events, will be held in a number of cities," Park said.

A pan-government committee for the preparation of the G20 summit will be launched in the middle of this month, the spokesman said. "The committee will be jointly headed by G20 Summit Coordinating Committee Chairman Sakong Il, presidential policy chief Yoon Jin-shik and Financial Services Commission (FSC) Vice Chairman Lee Chang-yong.

In the meantime, Sakong said Friday that Seoul would bring the developed and developing worlds together, stressing Asia's fourth-largest economy would play a leadership role in the making of a new global economic order.

In a breakfast seminar, "The Korea G20, East Asia and Korea," at the Westin Chosun Hotel in downtown Seoul, Sakong said it was a remarkable achievement for the nation to host the summit in November 2010, adding the government would make the event a success and turn it into a premier global forum.

"The fact that Korea was selected as the G20 summit chair of 2010 is proof of world leaders' confidence in the Asian country's potential leadership role. Now, we need to take the lead in the global effort to provide vision and devise a new growth model for a sustainable and balanced growth of the global economy," he told a group of Korean and foreign economists and policymakers at the seminar organized by the Korea National Committee for Pacific Economic Cooperation (KOPEC).

He said the G7 had lost its legitimacy over the past decade by not including emerging economies, stressing the rise of the G20 was a reflection that global power was shifting to the East from the West. "Following the current financial crisis, international economic issues cannot be addressed without emerging economies. The G20 will and should be a premier forum for global policy cooperation and coordination," he said.

Touching on exit strategies, the chairman said the G20 should come up with general principles to provide guidance for member economies. "Even though each country faces a different situation, they should steer their economies to return to normal within an agreed and coordinated global consensus to achieve maximum results."

Among major policy issues for the G20, Sakong said global rebalancing cannot be discussed without reforming the global financial architecture. "We need to make international financial institutions more credible and complete the Doha Round as early as possible. The world should also counter growing protectionism and improve food and energy security," he said.

Sakong added that gaining cooperation from non-member economies was critical for the success of the G20, adding a range of development issues should be discussed in the forum.

"The G20 cannot afford to lose support from more than 172 non-G20 members. We have to tackle their concerns, which are mostly development issues. Korea is well positioned to bridge the gap between the developing and developed worlds. With the firsthand development experiences and the successful overcoming of the 1997-98 Asian financial crisis, the nation has a lot to share with emerging countries," the chairman noted.

Foreign participants at the seminar also echoed Sakong's view, saying that Korea should assume a greater role in the G20 and speak for developing countries in Asia and other parts of the world.

"Korea's hosting of the G20 summit next year is good not only for the country, but also for Asia. As far as I know, the region is supporting Korea's increasing international role and in return, the country should make more efforts to reach out to other regional economies and work together for common goals," said Jusuf Wanandi, Publisher of The Jakarta Post.

Peter Petri, professor at the Brandeis International Business School in Honolulu, Hawaii, also said Korea should strengthen its leadership role in the region. "Korea is ideally positioned to assume a bridging role between advanced and developing worlds, as well as between Asia and the rest of the world. At the November G20 summit, it should represent interests and concerns of the entire region and strike a balance with those of the West."

leehs@koreatimes.co.kr
Posted by NO Base Stories of Korea at 8:01 AM