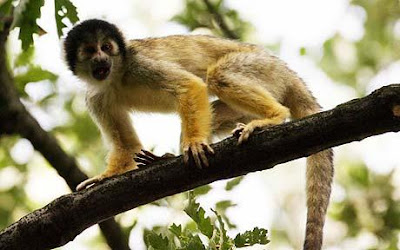 NASA says it would take almost a year using conventional rockets to get to Mars. By that time a human body would likely turn to jello due to exposure to space radiation. But the space agency has come up with a solution - in fact two of them.

First they want to build the nuclear rocket (Project Prometheus) which NASA says would cut in half the amount of time it would take to get to the red planet. With nuclear reactors for engines NASA also says they could carry heavier payloads which would make it possible to "mine the sky" for precious minerals.

The other solution to the space radiation problem seems to rely on testing monkeys by exposing them to doses of radiation so NASA can further study the effects on the human body.

The Telegraph newspaper in the UK reports, "Eleanor Blakely, a biophysicist at Lawrence Berkeley National Laboratory, said: 'Obviously, the closer we get to man, the better.'

"The researchers are to pay particular attention to the effects on the monkeys’ central nervous systems and behaviour. The monkeys, previously trained to perform a variety of tasks, will be tested to see how the exposure affects their performance.

"The Physicians Committee for Responsible Medicine (PCRM) says that the 'cruel experiments' may involve 'restraint and other cruel procedures'.

"In a statement, they say: 'Monkeys, like other primates, are highly intelligent, have strong family bonds, demonstrate empathy, and, most importantly, suffer.'"

Not only the monkeys will suffer from this NASA boondoogle to journey to Mars but the Department of Energy labs, that will be responsible for building the nuclear rockets, has shown over the years a complete lack of ability to control the deadly plutonium they will use to power the nuclear space missions. The DoE's record of worker and environmental contamination is more than shocking and they should not be trusted to now ramp up the production of plutonium for the nuclearization of space.

NASA and the DoE have little regard for animal or human life when it comes to moving nuclear power into space. The nuclear industry views space as a new and vibrant market and they could care less the consequences as long as profits can be extracted from space.

At the very time that climate change cries out for attention here on our Mother Earth we should not be wasting scarce tax dollars on planning expensive and ill-fated missions to Mars.

JUST IN: Two people have emailed me today saying that whoever in Congress votes to fund these missions should have to go along for the ride as well. Not a bad idea I'd say!

Posted by NO Base Stories of Korea at 7:35 PM