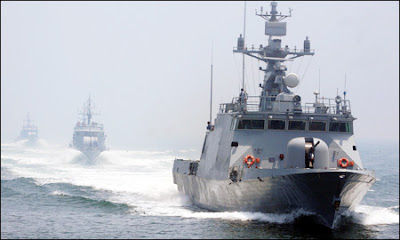 * Image source/ caption: Korea Times:
South Korean Navy Cham Soo-ri class patrol vessels conduct a drill in this undated photo.
Another boat in the class and a North Korean patrol ship exchanged fire near the maritime border in the West Sea, Tuesday, in the first armed clash between the two Koreas in seven years.
/ Courtesy of the Navy

A South Korean warship shot at a North Korean navy ship that crossed the disputed western sea border Tuesday morning and the North's ship shot back, said an officer at the Seoul's Joint Chiefs of Staff.

Navies of the two Koreas fought deadly skirmishes along the western sea border in 1999 and 2002. The clash in 2002 left six South Korean soldiers dead and others wounded.

North Korea last month accused South Korean warships of broaching its territory in waters off the west coast and warned of a clash in the zone, which is a rich crab fishing area.

The latest conflict comes amid international tensions over North Korea's nuclear weapons program and expectations that Pyongyang and the United States may soon engage in direct talks.

Meanwhile, there were no signs of tension along the heavily fortified land border separating the two Koreas. South Korea's Joint Chiefs of Staff said that there were no unusual tro

op movements on the North Korean side of the land border.