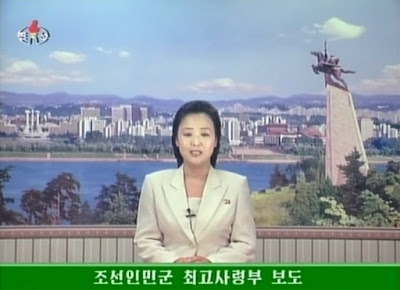 * Image source: same as below
'An anchor of Korea Central TV delivers a statement from the high command of North Korea
to ask the South Korean military to apologize for the clash that occurred
between North Korean and South Korean navies near the NLL, Nov. 10.'
Hankyoreh
Experts caution West Sea naval “clashes” could warrant international intervention:
They say the U.S. and China negatively view increasing tensions in the West Sea, and that it is time to reign in naval commanders.
Nov.13, 2009

An anchor of Korea Central TV delivers a statement from the high command of North Korea to ask the South Korean military to apologize for the clash that occurred between North Korean and South Korean navies near the NLL, Nov. 10.

Tuesday’s naval clash in the West Sea near Daecheong island did not escalate, but experts have warned that clashes in the waters near the Northern Limit Line (NLL) could at any time turn into an international conflict.

It was due to these concerns that the Kim Dae-jung government defined the first and second West Sea naval clashes of 1999 and 2002 as “accidental armed clashes” rather than “battles.” A former high-ranking official who attended the meeting of security-related ministers during the 2002 clash said Thursday that if the government calls the clash an intentional North Korean provocation or a “battle,” the U.S. military could intervene and it could become an international conflict. The former official added that because the U.S. also does not wish to intervene it has agreed with our judgment that it was an “accidental clash.”

Experts criticize that, viewed in this context, it is possible to see just how dangerous measures taken since the start of the Lee Myung-bak administration to strengthen the free hand of commanders on the ground have become. The feeling on the ground is to respond as aggressively as possible to achieve “victory,” so giving a free hand to commanders opens the way to escalation. In a worst-case scenario, one cannot exclude a possible situation that would involve an accidental clash and growing battle, followed by U.S. military intervention.

Experts also point out that armed clashes in the West Sea are also intimately tied to Chinese interests. According to them, if an armed clash in the West Sea grows, traffic to and from major Chinese ports such as Shanghai and Tianjin could be paralyzed. Chinese imports of raw materials from Europe and the U.S. and exports of completed goods largely depend on maritime traffic. As a result, the Chinese government also reportedly put out feelers during this latest West Sea clash. Lee Hee-ok, a professor of Sungkyunkwan University and expert on China, said although the automatic military intervention article of the Sino-North Korea Treaty of Friendship is now almost a dead letter, China cannot help but negatively view increasing tensions in the West Sea.

http://nobasestorieskorea.blogspot.com/2009/06/letter-fwd-letter-sent-to-presidents-of.html
Tuesday, June 23, 2009
Letter Fwd: Letter Sent to the Presidents of the Republic of Korea and the United States on the Occasion of the Korean-US Summit Conference (2009.6.16)

Posted by NO Base Stories of Korea at 7:24 PM