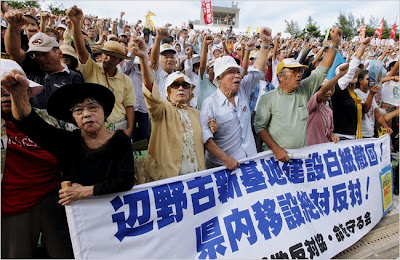 * Image source: Kyodo News, via Associated Press
‘Thousands of Okinawans protested Sunday, demanding that the airbase be moved off the island altogether.’ 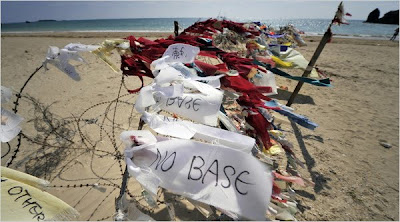 GINOWAN, Japan — Okinawans like Zenji Shimada, who have spent most of their lives under the thudding of helicopters from a busy American air base, are accustomed to disappointment. Decades of complaints about the base here and others on the island have gone largely unheeded, and a painstakingly negotiated plan to move the Marines from populated areas remains years from completion.

This summer was no different. Hopes stirred by the election of a new Democratic Party government were quickly dashed after members of the administration of the incoming prime minister, Yukio Hatoyama, backed away from the party’s pre-election promises to move the base off the island.

“We feel like Mr. Hatoyama has been jerking us around,” said Mr. Shimada, 69, a Protestant pastor who joined a lawsuit against the base.

When President Obama visits Tokyo on Friday as part of a weeklong tour of Asia, the base issue is perhaps the most prominent of several he will face as the countries’ long-close relations enter a new period of uncertainty. While Mr. Hatoyama has affirmed that the military alliance with the United States remains the cornerstone of Japanese foreign policy, he has also called for ending Japan’s “overdependence” on Washington and reorienting his nation toward a resurgent Asia.

“Japan-American relations have entered a new stage that people don’t really understand yet,” said Masaaki Gabe, a professor of international relations at Okinawa’s University of the Ryukyus. “Japan feels a lot of uncertainty about the future in Asia, but it also feels like it doesn’t have to follow quite so closely behind the United States.”

As the two nations search for a new balance, the fate of the base, the sprawling United States Marine Corps Air Station Futenma, has taken on heightened significance. Futenma has occupied the center of Ginowan, a city of 92,000, since it was built on land seized in the closing days of World War II.

“Japan-American relations have entered a new stage that people don’t really understand yet,” said Masaaki Gabe, a professor of international relations at Okinawa’s University of the Ryukyus. “Japan feels a lot of uncertainty about the future in Asia, but it also feels like it doesn’t have to follow quite so closely behind the United States.”

As the two nations search for a new balance, the fate of the base, the sprawling United States Marine Corps Air Station Futenma, has taken on heightened significance. Futenma has occupied the center of Ginowan, a city of 92,000, since it was built on land seized in the closing days of World War II.

It was this base, with its busy runway lying adjacent to homes and a university and its flight paths running directly over crowded neighborhoods, that Washington initially agreed to move in 1996 after a public outcry over the rape of a 12-year-old schoolgirl by three American servicemen.

Washington wants to proceed with a 2006 agreement to move the Marines to a less heavily populated part of Okinawa by 2014. But Mr. Hatoyama’s party is now backtracking, saying it may seek to renegotiate the deal. Mr. Hatoyama has postponed making a formal decision until after local Okinawan elections in January.

The airfield still operates in this densely populated city, 13 years after the initial deal, because of bureaucratic foot-dragging and Tokyo’s inability to find another community to take the Marines. Public clamor for the base’s removal surged again after a Marine cargo helicopter crashed in 2004 in a fireball on the neighboring campus of Okinawa International University, injuring three crew members.

Today, the university has turned the crash site into a small shrine by preserving a burned tree trunk and a concrete wall cleaved by the falling helicopter’s propeller.

For many Okinawans, Futenma has become the most visible symbol of an unfair burden placed on the island, home to about two-thirds of the 37,000 shore-based United States military personnel in Japan. On Sunday, 21,000 protesters gathered in Ginowan to demand that Mr. Hatoyama fulfill his party’s earlier promises to move the base off Okinawa.

“Our fight against the injustice of these bases has been going on ever since the Battle of Okinawa” in World War II, said Ginowan’s mayor, Yoichi Iha, one of the protest’s organizers. “The backlash will also be huge if the Democratic government reneges on its promises.”

His sentiments, and those of many here, are written in English across the roof of its city hall, for American aviators to see: “Don’t Fly Over Our City!” Mr. Iha said he was demanding the base’s removal from the island because he did not want to shift his city’s burden onto another Okinawan community.

Indeed, the 2006 deal to move the Marines to a V-shaped airfield to be constructed near the fishing village of Henoko only angered many Okinawans, who see the continued American presence as a symbol of Tokyo’s neglect of the island, which was part of the independent Ryukyu Kingdom before annexation by Japan in the 1870s.

Okinawans said they felt betrayed last month when a Democratic leader, Foreign Minister Katsuya Okada, seemed to reverse his party’s longstanding promise to move the base off Okinawa, saying such a move would be too time-consuming. Mr. Okada said that instead he wanted to consider moving the Marines to a larger United States Air Force base on Okinawa, a plan that both nations had already rejected.

Anger here also runs high at the Obama administration after Secretary of Defense Robert M. Gates’s visit to Tokyo in October to press for the existing deal for a move to Henoko. When Mr. Gates warned that any changes might undo a broader agreement with Washington to move about 8,000 Marines to Guam, he was criticized in the Japanese news media as a bully.

Officially, the White House has said it wants to give the new government time to assess its predecessor’s policies. But there have been concerns in Washington and Tokyo, voiced last week in an editorial by the conservative Yomiuri Shimbun, Japan’s largest daily newspaper, that what it called Mr. Hatoyama’s indecision was eroding trust between the allies.

Not all Ginowan residents are against the base. Manami Onaga, 40, who helps manage a 1950s-theme diner selling hamburgers and tacos outside Futenma’s main gate, said the Marines brought Ginowan needed jobs and money. Okinawa had Japan’s lowest per capita annual income in 2006, less than half of Tokyo’s $45,000, according to the Cabinet Office.

But more seem to agree with Mr. Shimada, the pastor.

“Obama promised change, and that’s what we want,” Mr. Shimada said. “We want him to recognize the problems that his country’s military is inflicting on us.”

Posted by NO Base Stories of Korea at 3:02 AM