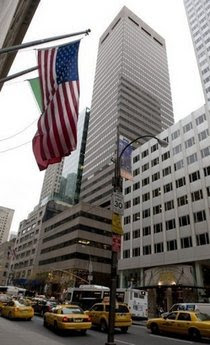 * image source/ caption: same as the article below

'The Piaget Building in New York which is owned by a non-profit Muslim group suspected of ties to the Iranian regime. Iran's Mahmoud Ahmadinejad has urged Washington to unblock Iranian assets, as US President Barack Obama warns of "consequences" after Tehran's dismissal of a UN-brokered nuclear fuel deal.
(AFP/File/Don Emmert)' 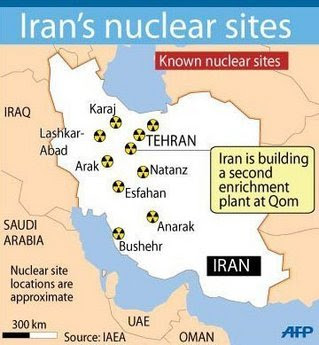 SEOUL (AFP) – President Barack Obama warned Thursday that the United States and its partners were working on a package of steps to show Iran the "consequences" of its decision to snub a nuclear deal with world powers.

Obama significantly upped pressure on Tehran after it rejected UN-backed efforts to send most of its stocks of low-enriched uranium abroad, escalating a showdown with the West over its nuclear drive.

But the Islamic republic hit back, warning that the framing of any new sanctions would recall past attempts to contain Iran and would fail to change its behaviour.

In his first public comments on the crisis since Tehran announced it would not accept the deal on Wednesday, Obama said he still held out hope that Iran would walk through the door of cooperation.

But he warned: "We have begun discusions with our international partners about the importance of having consequences.

"The dual track approach requires Iran to get a clear message that when it fails to take advantage of these opportunities that it in fact is not making itself more secure, it is making itself less secure," Obama said.

"Our expectations are that over the next several weeks we will be developing a package of potential steps that we could take that will indicate our seriousness to Iran."

World powers have warned Iran that it could face tough new sanctions if it rejects the deal, amid sharp concern over what the West says is a covert effort by Tehran to develop nuclear weapons.

But during a visit to the Philippines, Iranian Foreign Minister Manouchehr Mottaki scoffed at new US threats of punishment.

"Sanctions was the literature of the '60s and the '70s," Mottaki said.

"Well, in the last four years they have the experience of doing so. And I think they are wise enough not to repeat failed experiences. Of course it's totally up to them."

The Obama administration was initially optimistic that Tehran would accept the International Atomic Energy Agency (IAEA) deal which emerged from talks between Iran and Russia, China, the United States, Britain, France and Germany.

But hopes had been all but dashed following Iran's slow response and its reaction to the UN plan.

Iran ruled out proposals backed by the major powers for it to ship out more than 70 percent of its uranium stocks before receiving any nuclear fuel in return.

Mottaki said Iran was prepared to consider the idea of a simultaneous exchange of uranium for fuel but the UN nuclear watchdog has already said that idea is unacceptable to the Western powers.

"We will definitely not send out our 3.5 percent enriched uranium," Mottaki said.

Western leaders have expressed fears that Iran might covertly divert some of its uranium stocks and enrich them further to the much higher levels of purity required to make atomic weapons, an ambition Iranian officials strongly deny.

Western governments support the UN-brokered deal because they believe it would leave Iran with insufficient stocks of low-enriched uranium with which to make a bomb.

Obama's comments stiffened the US line, after the State Department had said that the international community was "not quite" at the point of switching from engaging Iran to pressuring it over its nuclear programme.

France, which had been set to play a central role in the proposed deal, said it would continue to speak with Iran but voiced disappointment at the "negative" stance so far.

"There is a clear and negative response from the Iranians," Foreign Minister Bernard Kouchner said.

Under the IAEA-brokered proposals, Iran would send out 1,200 kilogrammes (more than 2,640 pounds), which would then be further enriched by Russia and converted into fuel by France before being supplied to a Tehran reactor.

"The amount they mentioned for the swap is not acceptable ... and our experts are still studying it," Mottaki said.

The visit by the IAEA team was announced on Wednesday by Iran's envoy to the IAEA, Ali Asghar Soltanieh.

The inspection is the second by the IAEA in less than a month. Four inspectors first visited the plant on October 25 after its disclosure by Iran to the agency triggered intense outrage in the West.

The Fordo plant, named after a nearby village where large numbers of Iranians were killed during the war with Iraq in the 80s, is guarded by anti-aircraft guns and is being built inside a mountain.
Posted by NO Base Stories of Korea at 9:58 AM