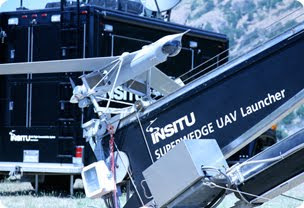 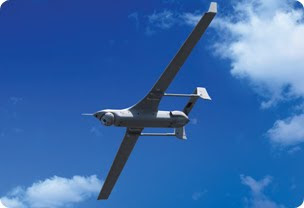 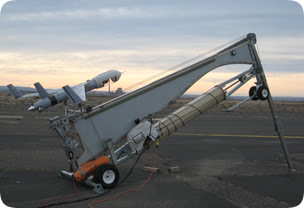 From Bruce Gagnon(globalnet@mindspring.com) on Nov 22, 2009

Insitu is not a bad company, but it has chosen the wrong fight.

That’s the message brought to Hood River Friday by Bruce Gagnon, in a speech in opposition to the manufacture by Bingen-based Insitu, and other companies, of unmanned drone aircraft.

“Drones are a manifestation of the growing U.S. military culture,” said Gagnon, co-founder and coordinator of the Global Network Against Weapons and Nuclear Power in Space.

Gagnon, 57, spoke to a capacity audience of about 200 people at St. Mark’s Episcopal Church. Columbia Peace Fellowship sponsored the talk, held to observe Armistice Day, as Veterans Day was known prior to World War II.

About 60 people attended a potluck at the church just before his talk, and about 40 attended a candlelight vigil, in the drizzle, at Overlook Memorial Park.

“We honor veterans by speaking out for peace,” said Linda Short of CRPF.

Gagnon has spent most of the past 20 years opposing space-based military technology and the past five years in full-time study of unmanned aircraft and its growing use by military branches in the U.S., and other nations.

He talked for nearly 10 minutes before ever mentioning Insitu, the Boeing-owned firm that designs and manufactures unmanned aircraft and their supporting technology.

Insitu now has more than 700 employees at offices in plants throughout Klickitat, Hood River and Skamania counties, and has asked Gorge public agencies to present proposals for creating an Insitu campus.

Gagnon stressed that communities can seek ways to develop jobs without relying either on military purposes for tax money or on war applications for technology, he said.

“When people say ‘drones mean jobs,’ your job is to tell them that’s not the whole story,” he told the audience.

Gagnon argued that investments in drone technology would be better directed at a fight not in the Middle East but in the greater, urgent problem of global warming.

“What do drones do to help solve the biggest threat to the planet today? As they say in New York – bupkis.

“Converting the military industrial complex to things such as sustainable technology would help solve global warming. It would be a step in the right direction.”

Gagnon said investing in military technologies is a self-perpetuating cycle that communities should avoid.

He said economists have found that $1 billion spent on drone research and manufacture results in 9,000 jobs while the same expenditure on home weatherization or mass transportation yields between 12,000 and 19,000 jobs.

The drone issue is not limited to the Gorge and the Insitu question; drones are manufactured in at least seven states. Gagnon said that in his travels he has seen many communities where the economic stimulus prospects were drawn as drones-or-nothing.

“People tell me, ‘We’d rather have (other) jobs but no one ever told us that before.’”

He said city, county and business leaders need to be challenged to seek out “an alternative economic vision” for the people they serve.

“People in America today are job-scared, and job-hungry,” Gagnon said. “We need to educate the U.S. public that it is not getting the biggest bang for its buck.”

Turning drone millions into “pure science” research that will help Americans find ways to reduce its dependence on petroleum will serve America’s national security and natural resource dilemmas, according to Gagnon.

Gagnon said his opposition to military technology does not match his upbringing in Florida. Gagnon was vice president of the Okaloosa County (Florida) Young Republican Club in the 1960s and he volunteered in Richard Nixon’s 1968 presidential campaign.

He once sat at a fish dinner next to conservative Sen. Strom Thurmond, and when Gagnon flunked his Air Force entry physical, he would not take no for an answer.

Being in the military proved the foundation of his life-long doubts about the American government’s military tendencies.

He thanked the Vietnam-era soldiers who saw the protests outside the gates of the Travis, Calif., Air Force base and openly discussed it inside.

“They created a dynamic inside the base that forever changed my life. I am grateful to them.” That was 1971.

He said that in 2009 he senses an active sense of dissent in Hood River. Columbia Fellowship for Peace has sent him newspaper clippings from the editorial page, giving him a glimpse into the regional debate over Insitu’s growing presence here.

“I read all your letters, and created my speech out of them.

“You have created a raging debate about drones,” he said, noting that a similar debate is occurring in his hometown of Bath, Maine, where some locals are protesting the rendition of an Navy air base, set for decommissioning, into a cold-weather testing facility for drone aircraft. He said it has led to a statewide campaign to oppose the plan.

“You have succeeded here in creating positive non-violent conflict,” he said.

The level of opposition to drones might be larger, but different, than many in the audience think, according to Gagnon.

“Not everyone is against drones from the peace perspective. Some people don’t like it because of what it will do to our right of privacy.

“They (manufacturers) are increasingly developing technology so they can watch us and control our lives,” Gagnon said.

But his main concern is that drones, used in hundreds of air strikes in Afghanistan and Iraq in the past three years, are an example of what he calls “an increasingly militarized culture.”

Gagnon said that “the civilian uses argument is basically a lie.

“They speak of ‘civilian use’ as a way to try to calm people down, to divert them from the fact that these are war machines.”

He claimed that machines that have killed civilians cannot be described as “clean.”

“They are dirty, and they are creating more enemies all the time.

“The more enemies the drones create, the longer the fight goes on, and the more drones you need to build.”

He said the evidence is in the steady addition of permanent bases being built in Afghanistan.

Gagnon asked if residents of the Gorge want to be a part of an industry creating these weapons.

“Do you want to live in an increasingly militarized culture? We are becoming a killer nation. There are no other manufacturing jobs so we are creating jobs by building weapons for endless war. What does it say about us when we need to build weapons to feed our families?

“It’s the ongoing militarization of our culture. This is what is happening, but fortunately particularly here in this community, thank God there are people who care.”