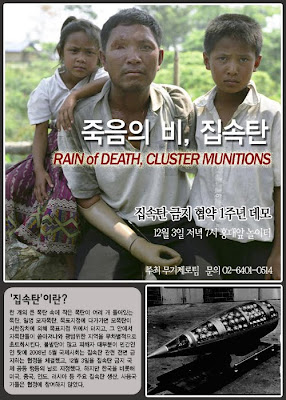 A Korean group called, “Weapon Zero (무기 제로팀)” calls the protest against the Cluster Munitions on Dec. 3, the first anniversary of the Convention on Cluster Munitions. The convention ‘was adopted in Dublin by 107 states on 30 May 2008 and signed on 3 December the same year’. ‘The Convention enter[ed] into force six months after the 30th state has submitted its instrument of ratification, and is open for ratifications and signature at the United Nations headquarters in New York.’ See the Convention website.

The poster urges the South Korea government who did not sign the convention yet to immediately sign it. The nations who did not sign yet include the United States, China, Russia who are the main product and use nations of cluster munitions. The South Korea (Hanwha Co, Poongsan Co.) is said one of the most active countries to produce the Cluster Munitions in Asia, with China. About 34 countries are heard to produce the cluster bombs. See the signatory countries.
Posted by NO Base Stories of Korea at 7:52 PM