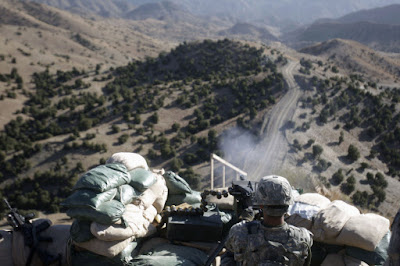 It has been confirmed that militants in Afghanistan have attacked the road construction site managed by a South Korean company around the same time that the Lee administration announced its decision to re-deploy troops to the country. The attacks hint at the fact that the security of employees of South Korean companies in Afghanistan, as well as that of re-dispatched troops and Provincial Reconstruction Team (PRT) personnel, will be in danger.

According to remarks from some government officials, the militants in Afghanistan have attacked the road construction site managed by a South Korean company identified by the initial ‘S’ three times over the past month, which consisted of two attacks last month and one attack this month. ‘S’ company currently has 80 employees in Afghanistan.

The South Korean government announced on Oct. 30 its plans to re-deploy 300 members of the military and police officers with 130 to 150 PRT personnel.

The first attack occurred on Oct. 8 when eight militants armed with guns and grenades attacked a construction site located in northern area of Afghanistan. The militants threatened the employees of the sub-contracted company and burned the company’s heavy equipment.

The second attack occurred five days after the first on Oct. 13 when ten militants attacked other road construction sites managed by South Korean companies and fled after burning two trucks and opening fire on a minibus with a machine gun.

On Nov. 5, militants attacked a depository, however, Afghanistan police officers were able to repel the militants after fifteen minutes of fierce fighting. There were no casualties of South Korean employees because they were not at the site.

The militants have not demanded money. Thus, the South Korean government has been considering the possibility that the militants received orders from Taliban to target South Korean companies in order to send a warning. A Foreign Ministry official, however, denied those claims and said, “We do not believe that these attacks were ordered by the Taliban because they were small-scale attacks and there were no casualties.”

Please direct questions or comments to [englishhani@hani.co.kr]
Posted by NO Base Stories of Korea at 3:02 AM