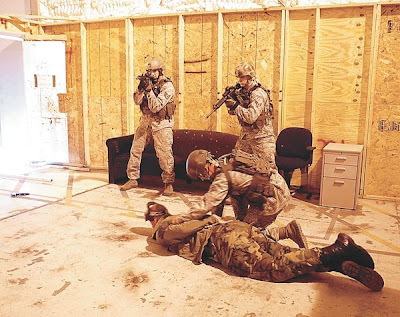 * Image source/ caption: Eloise Ogden/Minot Daily News
Members of the 91st Security Forces with the 91st Missile Wing at Minot Air Force Base train
for close quarters combat Nov. 5. The wing will be under a new command, Air Force Global Strike Command,
as of Dec. 1 but the jobs of wing personnel will not change.
The 5th Bomb Wing becomes part of the new command Feb. 1. 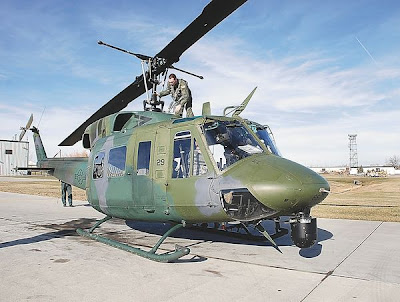 * Image source/ caption: Eloise Ogden/Minot Daily News
A crew with the 54th Helicopter Squadron at Minot Air Force Base gets ready to leave the base Nov. 5
to support the mission of the 91st Missile Wing in the Minot missile field.
When the helicopter squadron members and others in the missile wing become part of Air Force Global Strike Command on Dec. 1, their jobs remain the same. The 5th Bomb Wing will join the new command Feb. 1.

'It is the only base in the Air Force with dual nuclear-capable wings the 5th Bomb Wing and its B-52 bombers and the 91st Missile Wing and its 150 intercontinental ballistic missiles in underground facilities in northwest and north-central North Dakota.
When the new command is fully operational, it will have more than 23,000 people....Air Force Global Strike Command, which will bring together all strategic nuclear forces under one commander, was activated Aug. 7 at Barksdale AFB, the base selected for its headquarters.'

MINOT AIR FORCE BASE Members of the 91st Missile Wing at Minot Air Force Base will make history Dec. 1 when they become part of a new command Air Force Global Strike Command. The new command will oversee all of the Air Force's nuclear forces intercontinental ballistic missiles and bombers.

They'll be under a new command but the men and women who serve in the Minot missile wing won't notice much change in their jobs, except they'll be wearing the new Global Strike Command patch on their uniform, say new command officials.

Neither will airmen with the 5th Bomb Wing at the Minot base see a major change in their jobs when that wing becomes part of the new command on Feb. 1.

However, Minot AFB will be the most unique Air Force base in the new command, as it is now.

It is the only base in the Air Force with dual nuclear-capable wings the 5th Bomb Wing and its B-52 bombers and the 91st Missile Wing and its 150 intercontinental ballistic missiles in underground facilities in northwest and north-central North Dakota.

When the new command is fully operational, it will have more than 23,000 people, said Lt. Gen. Frank G. Klotz, commander of Global Strike Command, who visited the base and Minot community last month.

Klotz, who has a nuclear background, is a former commander of the 91st Missile Wing at Minot AFB.

Lt. Col. John Thomas, director of Public Affairs for Global Strike Command, said what is less visible in this reinvigoration of the nuclear enterprise is an organization which has been created in the Air Staff at the Pentagon, which is just about nuclear issues.

Thomas accompanied Klotz to the Minot base and Minot community last month.

Air Force Global Strike Command, which will bring together all strategic nuclear forces under one commander, was activated Aug. 7 at Barksdale AFB, the base selected for its headquarters.

Currently, there are about 250 people at the headquarters. More people come in the door every day," Thomas said. "By the end of summer 2010, there will be 900 or so people who are just dedicated to the reinvigoration of the nuclear enterprise," he said.

The new command will be taking on the nuclear-capable missiles ICBMs and bombers B-52s and B-2s. The B-1 bombers will not become part of the new command because that bomber does not have a nuclear role, Thomas said.

Laurie Arellano, chief of Public Affairs at the Minot base, said about 200 military members have arrived at the base out of the 700 or so military members plus their families projected for the new B-52 squadron.

The new squadron should be fully operational by October 2010, she said. "We will be operational with all planes by that time," she said. The base will be getting more planes from Barksdale AFB to add to its existing fleet.

When the ICBM units come under the new command on Dec. 1 and the bomber units on Feb. 1, the command will be fully operational.

But Thomas said they won't be fully operational and capable until the end of the summer. "It will take a while to build out that whole structure. In the meantime, Air Combat Command and Air Force Space Command are there to make sure nothing is dropped," he said.

Under the new command, the 5th Bomb Wing will remain as it is now as the host wing at the Minot base and its commander will remain in his capacity as bomb wing commander and installation commander, Klotz said.

Even for the short time that the missile wing is under the new command and the bomb wing still is under Air Combat Command, the relationship of the bomb wing being the host wing will be unchanged, Thomas said. He said the Public Affairs Office at the Minot base also will remain under the bomb wing and support both wings as it does now.

Although there aren't major changes planned for Minot AFB, Klotz is looking to replace the helicopters for larger, speedier ones to support the post 9-11 mission. The 54th Helicopter Squadron, which is a unit of the 91st Missile Wing, flies UH-1N helicopters.

By being unified under a single major command, Thomas said perhaps it will make it easier for resourcing the base.

Global Strike Command officials will be keeping a close watch on two important reviews being done by the Department of Defense.

Those reviews the Nuclear Posture Review and the Quadrennial Defense Review are under way now, Klotz told members of the Minot Area Chamber of Commerce when he spoke to them last month.

The reviews determine force structure requirements and final reports for both reviews will be provided to Congress in early 2010.

Whatever the outcome is of the reviews, Klotz said the role of the airmen at the Minot base will be the same.

As of Dec. 1, 20th Air Force, with its headquarters at F.E. Warren Air Force Base, Wyo., will come under Air Force Global Strike Command, along with its units:

As of Feb. 1, 8th Air Force, with its headquarters at Barksdale AFB, will come under the new command, along with its units:

The Minot and Barksdale wings have B-52s and the Missouri wing has the B-2.

Two direct reporting units also will be part of the new command: