The South Korean peace movements are determined to set force the collected protests against the Lee Myung Bak government. On Nov. 21, there was a rally in the Seoul Station. In the rally, people collected their will to fight against the Lee Myung Bak government and made their will for the December movement. The four main issues that had to be fight back were 1. Yongsan Tragedy: 2. Four river development project: 3: vicious media law reform and 4: Policy of the redeployment to Afghanistan. Even if it was a small number, one has faith that the struggle gets bigger as times goes.

The daily missal in Yongsan after its tragedy met its 300th day on Nov. 14. The same missal was held on Nov. 21 as well. Learned the beautiful song, Ivy(in the bottom) Like ivy, the leaflets covered the abandoned police car and all the area in the site of the tragedy. 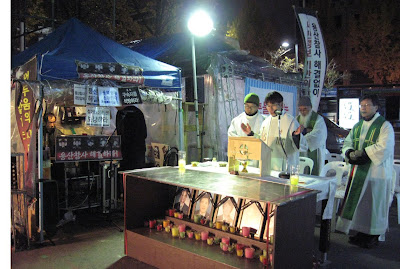 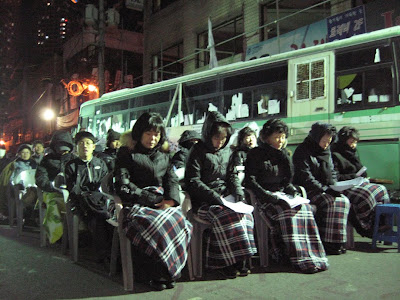 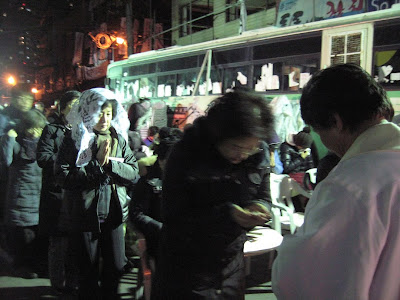 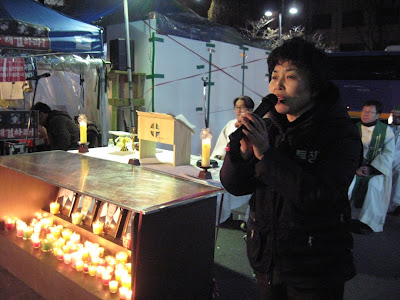 A family member of the Yongsan victims also denounces the government decision
of the re-dispatch to Afghanistan on Nov. 21, 2009 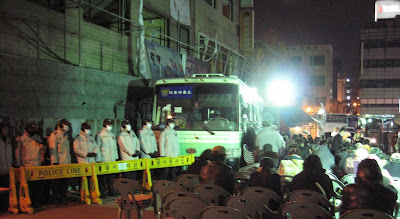 ---Poem by Do Jong-Whan, Song by Kim Jung-Sik and children

It’s a wall.
When we feel it is an impossible wall to get over,
Then,
An ivy leaf quietly climbs up the wall.
When people say it is the wall of despair,
With no drop of water, with no seed that can survive,
The ivies, without hurrying, go forward.
They go up inevitably hand in hand one another even if it is only a bit of span,
Until they cover all the despair with their green.
They grasp the very despair without laying down it.
When we drop our heads down, thinking it is the wall we can not get over.
An ivy leaf leads the thousands of leaves
And finally crosses the wall.

(Unofficial translation of the Korean, below)