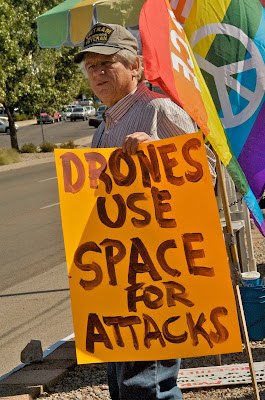 * Image source: same as below

Bob Anderson in Albuquerque, NM sent me a bunch of photos this morning from a protest they just held at Kirtland AFB. Kirtland is a key space warfare technology development base and the folks there who make up the group called Stop the War Machine hold regular protests at the base.

There was also a drone protest this past weekend in upstate New York were Reaper UAV's will be based.

Out near Las Vegas, Nevada a series of protests are being planned at Creech AFB where drones are flown via space satellites over Afghanistan and Pakistan. A CodePink bus will go from the San Francisco bay area to Creech on November 26 and folks will hold actions outside the base thru December 2.

Here in Maine the key advocate for a UAV flight test center at the closing Brunswick Naval Air Station, John Richardson, is declaring his candidacy for governor today. He is a Democrat, and former speaker of the Maine House of Representatives. In the last couple years he has been serving as the Commissioner of the Department of Economic and Community Development. In that role he has been serving on the base redevelopment authority and well over a year ago I saw an article in the local paper where he was pushing drones.

The Democrats are happy to take any and all Pentagon largess....that's one reason why I will be voting for Maine's Green Party governor candidate Lynne Williams in the next election.
Posted by NO Base Stories of Korea at 6:56 AM