Photos Fwd: Eyes to the Congress of the Jeju Island 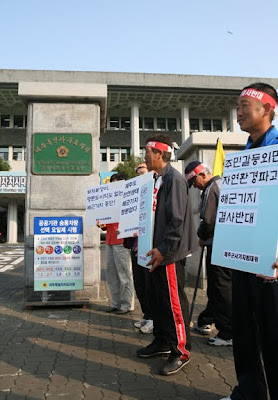 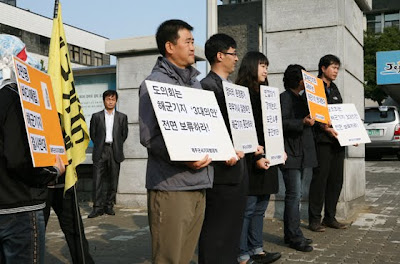 * All the Image source: same as the article below:
ⓒ Reporter, Jwa Yong Chul, Jeju Sori on Nov. 9, 2009
'Eyes to the Congress of the Jeju Island
…Picketing Protest, Entrance and Exit Controlled, “Tension” Staged

Gangjeong Village People’s Council, Pan-Island Committee against the Jeju Naval Base,
Picketing Protest in front of the Front Gate of the Congress of the Jeju Island on Sept. 9

* Below is the translation of the part of the article above

Village people and activists say the so called, ‘three agendas on the naval base’-1. Island congress’s agreement with the evaluation of the environmental impact, 2. Change on the absolute preservation area, 3. Audit on the opinion of the reclamation of the area adjacent to the public sea water- have been brought up for discussion into the related executive committee of the congress (not opened to the public), without the legal basis and reasonable cause for dealing with.

The Council for the Agriculture/Fishing/ Livestock Farming & Knowledge Industry, Jeju Island Congress decided to bring into the opinion on the ‘basic plan on the reclamation of the area adjacent to the public sea water’ related to the agendas of the Jeju naval base. A success, in part, for the Jeju Island Government. It has pushed the construction of the naval base and the discussion on it in the congress. But the area is the absolute preservation area, which demands the cancellation of the designation of the absolute preservation area for the proper discussion process for the reclamation. Otherwise, there is analysis that the council submitted by the lobby of the execution department, even though the three agendas have to be dealt with in package. (summary translation of Jeju Sori, Nov. 9, 2009) 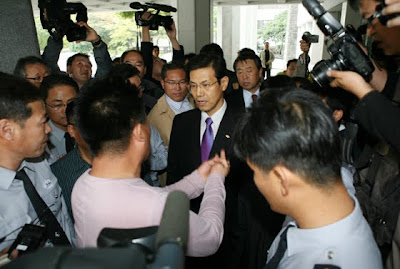 : The Council for the Agriculture/Fishing/ Livestock Farming & Knowledge Industry, Jeju Island Congress decided to defer the review on the ‘audit on the opinion of the reclamation of the area adjacent to the public sea water’ related to the agendas of the Jeju naval base.

: Another agenda of whether it is the military base or military facility was discussed… different opinions among the Executive Department were exposed.