[ Reply to Cordaro Report: 8 arrested at "Die-In" at STRATCom Space Weapons Bazaar in Omaha - 91 year old Peg Gallagher among them.... 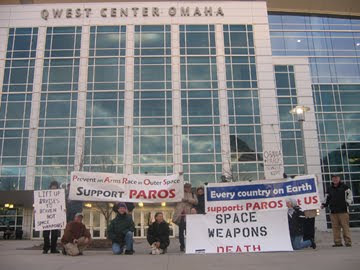 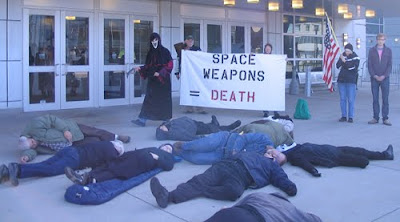 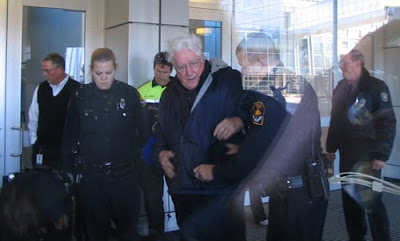 On Wednesday, November 4, 2009 at 11:00 a.m. the Omaha and Des Moines
Catholic Worker communities and friends held our fourth annual protest
and 'Die In" at the Qwest Center in Omaha at SRATCom's Space Weapons
Bazaar called the Strategic Space Symposium in Omaha NE, Nov 2-4
http://www.stratspace.org/

The effort began with a group of over 30 people gathered across the
street from the main entrance of the Qwest Center at 11 a.m. We moved
in mass across the street to the main entrance, set up our "Space Weapons
= Death" banner. We gathered around the banner and read of our
statement. (See a copy of the statement below.) After the statement
was read a number of people, including the 8 who were arrested laid
down on the ground in front of the banner, enacting a "Die-In". After
5 minutes people were called to their feet and directed to take the
"Die-In" into the Qwest Center where the Space Weapons Bazaar was
taking place. The protesters were stopped just inside the front doors
by Qwest security people and Omaha police officers. The protesters
proceeded to reenact their "Die-In" just inside the building at the
feet of the security people and police. Our statement was reread.
Qwest security people informed all protesters to leave the building or
face arrested. All but eight people left the building. Each of the
eight was asked by an Omaha police officer to leave the building or
face arrest. All eight were place under arrest, hand cuffed and
walked out the of the building into a police van or police car.

Among the eight people arrested was 91-year-old Peg Gallagher, “Grand
Dame of the Omaha Peace Movement”. Peg was ticketed and released right
on site. The seven other people who were arrested were taken to the
Douglas Co Jail, processed by the police and charged with City of
Omaha ordinance "20-155 Request to Leave" - a misdemeanor offense with
a maximum penalty of six months in jail and/or a five hundred dollar
fine.

The four Omaha residents were cited and release and given a Dec 9th
court date. The four out of town'ers were all held over night in the
Douglas Co Jail and appear in jail court the following day. Report to
follow.

*** It must be noted that Fr Jack McCalsin placed himself in the greatest risk by violating for the second time a Federal probation condition set for him from his Dec 28, 2005 line crossing. Fr Jack first violated his Federal probation by taking part in the 2008 "Die-In" at the Quest Center. At Fr Jack's first probation violation
hearing, Federal Magistrate Judge Thomas D. Thalken fined him $250 and
told Fr Jack that if he violated his probation again he would not
hesitate to send him to Federal Prison for six months.

November 4, 2009 - Midwest Catholic Worker and Friends Statement at
the Strategic Space Symposium at the Qwest Convention Center in Omaha
Nebraska.

The scriptures remind us of the hypocrisy of those who put their faith
in “gods of metal” to protect them.

Because of our faith we refuse to surrender the land, sea, air and the
heavens above to those who have given their allegiance to the gods of
war and greed.

We recall Martin Luther King Jr.’s admonition that “. . . a nation
which spends more money on military defense than on programs of social
uplift is approaching spiritual death”.

We are here to expose the lie of a legitimacy given by the City of
Omaha and the Qwest Convention Center to the 2009 Strategic Space and
Defense Symposium and we name this an unholy alliance, which can only
end in global death and destruction.

We call on the city of Omaha and this conference’s sponsoring
organizations and participating individuals to turn away from this
unholy collaboration with global death and evil and to choose a path
of uplifting physical and spiritual life.

So, we stage this “die-in” to say as clearly as we can, that “Space
Weapons = Death”.

--- From the Midwest Catholic Workers and Friends.

Posted by NO Base Stories of Korea at 1:14 PM