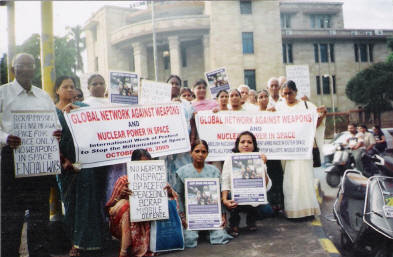 Unprecedented scientific and technological developments in Space Science have take place during the last few decades. The fascinating fantasy of space, manifested when Yuri Gagarin of USSR encircled the Globe in Space and Niel Armstrong set his foot on the Moon, the entire mankind celebrated the success of the scientists and technocrats. Space is sheltering in it’s bossom the Satellites to make the life of human beings more and more comfortable and adventurous. We are trying to make the Space a launching pad to step on to other planets.

At present Space has become part of human development. Space is being used for communications, entertainment, telecommunications, meteorology, environmental monitoring, disaster prevention, education, surveilence etc. There are 240 Civil & Military Communiction Satellites and 800 other Satellites including remote sensing and reconniance satellites in Space. India also has a proud place in the Space and Satellite technology.

To ensure peaceful use of Space and prevent any deployment of weapons in Space, the United Nations has adopted a treaty on “Principles Governing the Activities of States in the Exploration and use of Outer Space, Including the Moon and other Cellestial Bodies” popularly known as the Outer Space Treaty of 1967. Some of the salient features of this treaty are:-

1.Exploration and use of Outer Space should be only for peaceful purposes.
2.Exploration and use of outer Space including the moon and other celestial bodies should be carried on for the benefit of all peoples irrespective of the difference of economic or scientific development in accordance with the International Law.
3.The establishment of military bases, installations fortification, the testing of any type of weapons and conduct of military maneuvers on celestial bodies is forbidden.

1.The moon shall be used only for peaceful purposes
2.No objects carrying nuclear weapons or any other weapons of mass destruction can be put in orbit around the moon or on the moon.
3.No military bases, installations can be established on the moon.
In a nutshell it can be said that either on the moon or in Space no weapons and military activities can be done.

At present there are 47 Countries which have deployed their Satellites in Space. Out of these only 10 Countries including India have the technical capability to launch satellites into Space. There are scentitific space crafts carrying sophisticated payload of telescopes. There is an orbiting international Space Station. There are hundereds of Space Contgrol Centres. Space transportation is very expensive. At present the cost of pay load of per Kg into orbit is 20,000 US Dollars.

With the end of of the Cold War every one thought that the danger of Nuclear war is now averted and there will be peace in the world. Unfortunately it has become premature to conjucture like that. There is another danger cropping up. The danger of STAR WARS.

On March 23, 1986 US President Ronald Regan announced that US will develop weaponisation of Space. He named it as “Strategic Defense Initiative” which has become popularly known as Star Wars programe. His successor George H.W. Bush renamed it as “National Missile Defence” What ever may be the nominclature the object is the same i.e weaponising space.

The US plans for space domination is outlined in the document “VISION FOR 2020” prepared by the US Space Command.It has outlined that space will be used for warfare just like land,sea and air.To ensure US dominance on future battle fields it is essential to control space medium and deny other countries to use Space. The US Space Command announced that “dominating the space dimension of military operations to protect US interests and investments, integrating space forces into war fighting capabilities across the full Spectrum of Conflict”.

This venture of US is in violation of the Outer Space Treaty. All countries have opposed this. Russia, China and Canada are moving resolutions in the G.N Genral Assembly against weaponisation of space by US. Even India made it clear that Space should remain for peaceful purposes and not for deployment of any weapons. Abdul Kalam former President of India while inaugurating an International Conference on Space Security on November 13, 2007 made it clear that “when enormous societal and economic commitments have been made by nations with space infrastructure, the main security concern is that outer space should be free of weapons. We must recognize the necessity for the world space community to avoid terrestrial geo-political conflicts to be drawn into outer space thus threatening the space assets belonging to humanity”.

Russia warned that if any country deploys weapons in space it will be retaliated. Russia declared that it does’t like any space war and would’t permit any other country to do so
Women’s International League for Peace & Freedom(WILPF) declared that “We see outer space as an integral part of the common heritage of humankind. All scientific exploration and any other use of outer space should be for civilian research only with a view to furthering the wellbeing of humanity and not for the destruction of life and the environment. The Global Network Aginst Weapons and Nuclear Power in Space is spearheading an international movment against weponisation of space.
-------
Posted by NO Base Stories of Korea at 4:51 AM