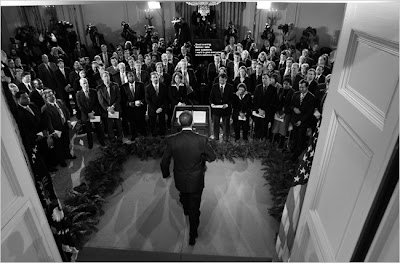 Get Ready for the Obama/GOP Alliance
By Jeff Cohen

With Obama pushing a huge troop escalation in Afghanistan, history may well repeat itself with a vengeance. And it’s not just the apt comparison to LBJ, who destroyed his presidency on the battlefields of Vietnam with an escalation that delivered power to Nixon and the GOP.

There’s another frightening parallel: Obama seems to be following in the footsteps of Bill Clinton, who accomplished perhaps his single biggest legislative “triumph” – NAFTA – thanks to an alliance with Republicans that overcame strong Democratic and grassroots opposition.

It was 16 years ago this month when Clinton assembled his coalition with the GOP to bulldoze public skepticism about the trade treaty and overpower a stop-NAFTA movement led by unions, environmentalists and consumer rights groups. How did Clinton win his majority in Congress? With the votes of almost 80 percent of GOP senators and nearly 70 percent of House Republicans. Democrats in the House voted against NAFTA by more than 3 to 2, with fierce opponents including the Democratic majority leader and majority whip.

To get a majority today in Congress on Afghanistan, the Obama White House is apparently bent on a strategy replicating the tragic farce that Clinton pulled off: Ignore the informed doubts of your own party while making common cause with extremist Republicans who never accepted your presidency in the first place.

“Deather” conspiracists are not new to the Grand Old Party. Clinton engendered a similar loathing on the right despite his centrist, corporate-friendly policies. When conservative Republican leaders like Newt Gingrich and Dick Armey delivered to Clinton (and corporate elites) the NAFTA victory, it didn’t slow down rightwing operatives who circulated wacky videos accusing Clinton death squads of murdering reporters and others.

For those who elected Obama, it’s important to remember the downward spiral that was accelerated by Clinton’s GOP alliance to pass NAFTA. It should set off alarm bells for us today on Afghanistan.

NAFTA was quickly followed by the debacle of Clinton healthcare “reform” largely drafted by giant insurance companies, which was followed by a stunning election defeat for Congressional Democrats in November 1994, as progressive and labor activists were lethargic while rightwing activists in overdrive put Gingrich into the Speaker’s chair.

A year later, advised by his chief political strategist Dick Morris (yes, the Obama-basher now at Fox), Clinton declared: “The era of big government is over.” In the coming years, Clinton proved that the era of big business was far from over – working with Republican leaders to grant corporate welfare to media conglomerates (1996 Telecom Act) and investment banks (1999 abolition of the Glass-Steagall Act).

Today, it’s crucial to ask where Obama is heading. From the stimulus to healthcare, he’s shown a Clinton-like willingness to roll over progressives in Congress on his way to corrupt legislation and frantic efforts to compromise for the votes of corporate Democrats or “moderate” Republicans. Meanwhile, the incredible shrinking “public option” has become a sick joke.

As he glides from retreats on civil liberties to health reform that appeases corporate interests to his Bush-like pledge this week to “finish the job” in Afghanistan, an Obama reliance on Congressional Republicans to fund his troop escalation could be the final straw in disorienting and demobilizing the progressive activists who elected him a year ago.

Throughout the centuries, no foreign power has been able to “finish the job” in Afghanistan, but President Obama thinks he’s a tough enough Commander-in-Chief to do it. Too bad he hasn’t demonstrated such toughness in the face of obstructionist Republicans and corporate lobbyists. For them, it’s been more like “compromiser-in-chief.”

When you start in the center (on, say, healthcare or Afghanistan) and readily move rightward several steps to appease rightwing politicians or lobbyists or Generals, by definition you are governing as a conservative.

It’s been a gradual descent from the elation and hope for real change many Americans felt on election night, November 2008. For some of us who’d scrutinized the Clinton White House in the early 1990s, the buzz was killed days after Obama’s election when he chose his chief of staff, Rahm Emanuel, a top Clinton strategist and architect of the alliance that pushed NAFTA through Congress.

If Obama stands tough on more troops to Afghanistan (as Clinton fought ferociously for NAFTA), only an unprecedented mobilization of progressives – including many who worked tirelessly to elect Obama – will be able to stop him. Trust me: The Republicans who yell and scream about Obama budget deficits when they’re obstructing public healthcare will become deficit doves in spending the estimated $1 million per year per new soldier (not to mention private contractors) headed off to Asia.

The only good news I can see: Maybe it will take a White House/GOP alliance over Afghanistan to wake up the base of liberal groups (like MoveOn) to take a closer and more critical look at President Obama’s policies.

- Jeff Cohen http://www.jeffcohen.org is an associate professor of journalism at Ithaca College and former board member of Progressive Democrats of America.