Koreans Declare the “7.27 Peace Ship Launch in the Mouth of Han River” Movement into the New Conversion Movement 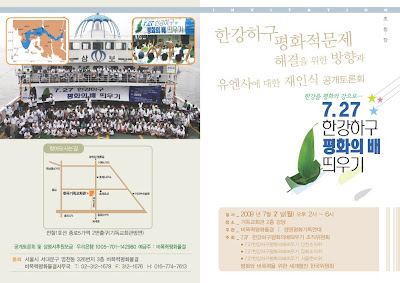 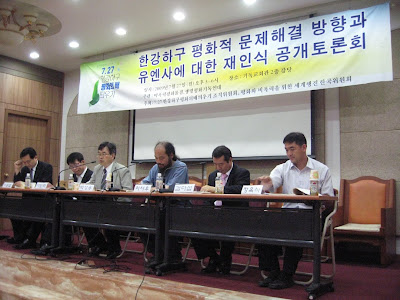 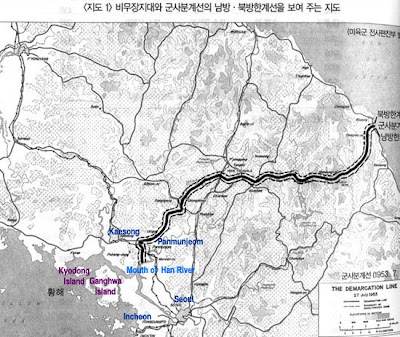 * Image source*
1. Nonviolence Peaceforce Corea
2. No Base Stories of Korea
3. Original Photo by Yoo, Young-Ho, 2001, Tongil News
‘A map attached to the Korean War Armistice Agreement, July 27, 1953’ (Name of the places in English added; The author notices the DMZ line-the thick line in the middle- along with the Northern Limited Line(NLL) and Southern Limited Line(SLL) -the both lines along the DMZ- were not drawn in the sea areas during the armistice negotiation period. The arbitrary NLL in the sea areas since then has specially become the controversy and source of conflict.


Koreans Declare the “ 7.27 Peace Ship Launch in the Mouth of Han River” Movement into the New Conversion Movement
July 27, 2009 (on the 56th anniversary of the Korean War Armistice Agreement)

There was a “Public Forum on the Ways of the Peaceful Solution on the Issue of Mouth of Han River and Re-Recognition of the UN Command” at the 2nd auditorium, Christian Hall, Jongno-Gu, Seoul, on July 27, 2009.

The 1 hour section was of the presentations by Seo, Bo Hyuk, Korea National Strategy Institute, on “The Korean War and the Birth, Role & Position of the UN Command”; Lee, Si-Woo, the theorist of the Mouth of Han River & peace photographer on the “ The Mouth of Han River and the Issue of the UN Command’s Jurisdiction Right”; and by Kim, Da-Sub, Attorney of Law on“the Victorious Indictment Examples in the U. S. courts around the Cases of the Crash of the Fighter Plane and Death of the Korean Pilot” .

The final section was discussed with the audience. There were many village people & organizers from the Ganghwa Island and Kyodong Island, who actively participated for the questions and suggestions.


[Below is the temporary unofficial translation of the statement and needs check & proofreading. The original Korean site is Nonviolence Peaceforce Corea.]

Statement Urging for Peace
Toward the Governments of the South and North Korea
We Declare the “ 7.27 Peace Ship Launch in the Mouth of Han River” Movement into the New Conversion Movement:

- Han River as the River for Reconciliation and Co-Living,
Cease Fire Agreement into the Peace Agreement-
As today is the 56th anniversary of the Korean War Armistice Agreement (Cease Fire Agreement), we meditate the event of launching the ‘Peace Ship’ four times at the mouth of Han River during the last [4 years], and urge the positive will for the new conversion of the mass peace movement by the civil society and for the peaceful co-existence by the both South & North Korean authorities so that we can take a first step toward the peaceful formation of the Korean peninsula at the mouth of Han River.

The Han River has once taken the role as the breakthrough for the ups & downs and wax & wane of the national history and for the big vein of the politics/economy/culture. However, it has become the powder magazine for the showdown by the DMZ [Demilitarized Zone] after the division and by the military confrontation between the South and North Korea. Even though the atmosphere for the reconciliation exchange and the discussion for the peaceful use of the mouth of the Han River that have waxed for a wile during the last participatory government, have progressed toward the 2.13 agreement and 10.4 conference [in 2007], they have confronted with the higher tension and crisis situation because of the counter-wind of the North Korea’s nuclear weapon development and the South Korea’s joint MD system [with the United States] & PSI participation.

The ‘Committee for the 7.27 Peace Ship Launch in the Mouth of Han River’( Committee for the Peace Ship Launch), basing on the positive clause of the safe navigation upon the Korean War Armistice Agreement, has brought the imagination of the reconciliation & exchange among all the people, media, and political system for the last 4 years since it has tried the first event for the Peace Ship Launch on July 27, 2005. However, the Peace Ship could not reach into its desired seaway because of the present frozen current, reason of safety, and the UN Command’s claim of ‘Jurisdiction’ that is not listed on the armistice agreement.

The present military showdown and the confrontational phase the authorities of the South & North Korea have reached to be immediately replaced with the co-trust & negotiation toward the peaceful reunification. We confirm for the Han river that has existed as of the blocked and the killing, to be conversed into reconciliation & co-existence, there have to be co-efforts of: Building the peaceful atmosphere in the political areas of the South & North; Revealing of the truth on the Jurisdiction [claimed by the] UN Command and the readjustment of its role through the international co-operation; and the strengthening of the power of the civil society.

We, especially begin not only with the mass movement for the peaceful reconciliation & co-existence but also with the self-examination that we solve our current issue by ourselves and with the alternative-suggestion movement . For that, we intend to open the mouth of Han River, the river of the killing & war as the practical zone for peace & life, through today’s “Public Symposium for the Ways of the Peaceful Solution for the Mouth of Han River and Re-Recognition of the UN Command”. For that, we declare to do as below.

Third, we suggest: To restore the seaways between the North & South to heal the suffering & pain of the home-losing migrants [during the war] , to co-exchange the civilians and materials at the areas of the mouth of Han river so that it can contribute the development of the home in the North Korea; and to drive the Kyodong island at the north tip of the Gwanghwa island into a ‘ Peace Island’. [* If you see the Gangwha map in the wikipedia, you can see how most sites do mot corectly reflect the Korea DMZ line. In fact, the DMZ line did nor exist in the original maps during the Koraen War Armistice Agreement, the researchers here have said. ]

Five, we will have solidarity with all the people who love life& peace, the general value of all the human being so that the cease fire agreement can be conversed into the peace agreement, through the setting of the life & peace area. We will also try to make our efforts to dissolve the social division, confrontation & conflict through the peace campaign so that the future generations inherit the peaceful Korean peninsula.

http://nobasestorieskorea.blogspot.com/2009/07/text-fwd-significance-of-kaesung-as.html
Friday, July 31, 2009
Text Fwd: The Significance of Kaesung as the City of Peace

http://en.wikipedia.org/wiki/Constitution_of_the_Republic_of_Korea
Constitution of the Republic of Korea

http://blog.daum.net/_blog/ArticleCateList.do?blogid=0LWxq&CATEGORYID=741877&dispkind=B2203#ajax_history_home
Series on the Mouth of Han River by Lee, Si-Woo