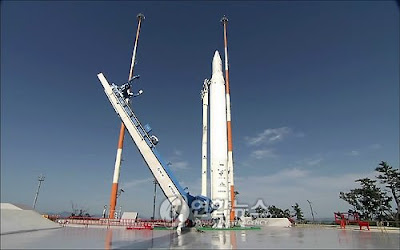 The Ministry of Education, Science and Technology said Russia's Khrunichev State Research and Production Space Center sent an official letter notifying local authorities that the test date for the Korea Space Launch Vehicle-1 (KSLV-1) has been set for July 30. If the test can be conducted as planned, the rocket could be launched in August if weather conditions are favorable.

"A letter was sent to the Korea Aerospace Research Institute that it will conduct the hot fire test," an official said. Khrunichev is in charge of building the main booster rocket.

South Korea, with no experience in launching rockets, is working with Russia to acquire rocket technology and expertise that could allow it to send locally made space vehicles into orbit in the future.

Originally, Khrunichev planned to conduct the test on Monday, but called for a delay to upgrade the test control and evaluation programs needed for the experiment. This move affected the launch date, which had been set for next Thursday.

The rocket fire test is important because engineers will fill the rocket with fuel and oxidation compounds and ignite it to simulate an actual launch.

There are currently two KSLV-1 rockets. The one planned for launch was delivered to South Korea last month, while the other is used by Russian technicians to conduct various tests related to turbo pumps, the jet motor and fuel pipes. Russia said it has successfully conducted a so-called cold flow test on the first stage of the KSLV-1.

The ministry stressed that if all tests are conducted and there are no problems, South Korea's first space rocket can theoretically be launched 13-14 days after the "hot fire test" is conducted.

The rocket, developed at a cost of 502.5 billion won (US$403.7 million), stands 33m tall, has a diameter of just under 3m and weighs 140t. The first stage main booster rocket, made in Russia, has a thrust of 170t, while the smaller, second-stage indigenous rocket can generate 8t of thrust. The rocket is designed to deliver the 100kg satellite into orbit.

The government built the Naro Space Center, located 485km south of Seoul, to launch the KSLV-1 and future rockets.

yonngong@yna.co.kr
Posted by NO Base Stories of Korea at 7:03 PM