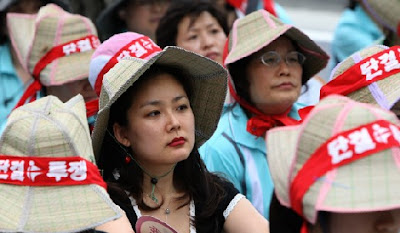 Image source/ description: same as source:
"Irregular workers who were fired listen to the testimony of other fired irregular workers at the demonstration hosted by the Korea Confederation of Trade Unions at Yeouido located in Seoul, July 3."

Study results have emerged showing that some 57 percent of irregular workers at public corporations had their contracts terminated after two years on the job.

The Federation of Korean Trade Unions (FKTU) said Sunday their study conducted through its 25 member unions on employment changes since the Irregular Worker Law went into effect reveals that 73 public institutions terminated the contracts of 217 of their 379 workers (57.3 percent) who had been working for two years as of June 30. The companies would have been required to offer the laborers a regular employment contract on July 1. This represents a portion of the 6,945 irregular workers employed at these institutions.

The FKTU said it was only at public corporation unions that irregular workers have experienced sudden dismissals. It said the recent mass lay-offs of irregular workers at public corporations have its roots in the administration‘s one-sided public corporation policies. As a countermeasure, the FKTU established headquarters to anchor a joint struggle in the public sector on July 2, and plans to hold a rally of public-sector unions with the participation of some 20,000 unionists on July 18. The Korean Confederation of Trade Unions’ (KCTU) public transportation union alliance plans to carry out its own investigation of the termination of contracts of irregular workers. KCTU spokesman Lee Seung-chul said public corporations should be models of labor-management relations, but if they unilaterally layoff workers as a legitimate way to avoid compliance with the law, the layoffs would expand in the private sector, too.

Please direct questions or comments to [englishhani@hani.co.kr]
Posted by NO Base Stories of Korea at 9:16 PM