Text Fwd: Will drones push fighter pilots out of the cockpit? 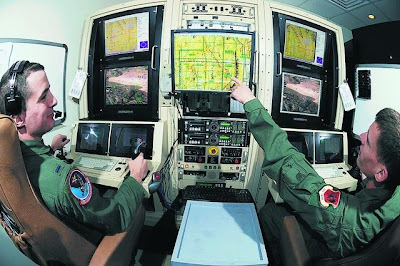 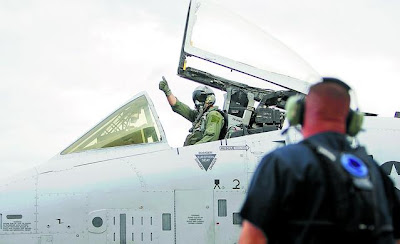 2. Air Force Maj. Bryan Dresser does a pre-flight check on an A-10 Thunderbolt II before takeoff at Davis-Monthan Air Force Base. (Jill Torrance / Arizona Daily Star)

3. The MQ-1 Predator is among the unmanned aircraft, or drones, that some see as the future of the Air Force. (Leslie Pratt / Air Force)

For as long as Col. Paul Johnson has been in the cockpit, the fighter pilot has been an icon of American military might.

Now, after nearly a quarter century in uniform, he's witnessing the beginning of the end of that era.

Increasingly, the U.S Air Force is turning to unmanned aircraft to perform work once done exclusively by aviators like Johnson, the wing commander of Davis-Monthan Air Force Base.

At the highest levels of the Pentagon, plans are under way to reduce the role of warplanes, and rely more heavily on remotely piloted craft.

"This is massive," said Johnson, an A-10 pilot with more than 2,000 hours in the skies, describing the potential changes ahead.

"It's a head-exploding topic," he said. But "for us to sit on the sidelines and ignore this new technology would be irresponsible."

In the space of a generation or two, officials say, Air Force bases like D-M could be doing much of their business by remote control, reducing jet noise over urban areas while saving money, improving effectiveness and preventing risk to the lives of military personnel.

How much of the service's work can be done by drones is the subject of intense research and debate in Washington, and there are many unknowns about how quickly such technology will advance.
Already, though, some are envisioning the end of the Air Force as we know it.

Peter Singer, director of the 21st Century Defense Initiative at the Brookings Institution, one of Washington's oldest and most respected think tanks, predicts a vast array of missions for unmanned craft, from stealth bombing to electronic warfare — even dogfights.

"It's not just intelligence and bomber pilots who will be replaced with machines," said a recent article by Singer, a campaign adviser on defense policy to President Obama.

"Planning is proceeding on UCAVs, unmanned combat aerial vehicles, which will replace fighter jocks, too."

Defense Secretary Robert Gates is among those gazing into the future.

In a May appearance before the Senate Armed Service Committee, Gates suggested that the Joint Strike Fighter or JSF — the warplane due to replace the A-10 attack jets flown at D-M — could be America's last manned fighter.

"We're at a real time of transition here in terms of the future of aviation," Gates told senators, according to a transcript.

"There are those that see JSF as the last manned fighter, or fighter-bomber, or jet. And I'm one of — you know, I'm one that's inclined to believe that. I don't know if that's exactly right. But this all speaks to the change."

This year, for the first time in history, the Air Force expects to train more unmanned aerial vehicle pilots — 240 — than conventional fighter-bomber pilots — 214.
Col. Eric Mathewson, head of the Air Force's unmanned aircraft task force at the Pentagon, said the service plans to examine all its missions to see which can be adapted for unmanned flight.

He doesn't picture pilots going away completely — at least, not anytime soon. But he can't predict what's ahead, he said, because UAV technology is still in its infancy.
"You can't judge UAVs by what you see today. That would be like judging all aircraft by looking at the Wright Flyer," Mathewson said, referring to the first powered plane, built by the Wright brothers in 1903.

UAVs have been used in various forms since the Civil War but were limited by low technology. They didn't come into heavy use until recently in Iraq and Afghanistan, and their stellar showing there is a big part of what's driving the current push to find other uses.

The most common Air Force UAVs — the Predator, and its supercharged sibling, the Reaper — are armed with Hellfire missiles. They're used for reconnaissance and surveillance and can carry out strikes against smaller targets.

Col. Trey Turner, a former Navy F-14 pilot who now oversees Air Force UAV training at the Pentagon, said the Predator and the Reaper are "phenomenal" performers in counterinsurgency work.
Even in their infancy, they outshine piloted aircraft for some tasks, Turner said.

A manned jet, for example, typically needs refueling after an hour or so, and human pilots need rest breaks.

A UAV never tires. It can stay aloft for 18 hours or more, staring at hot spots and attacking insurgents caught on camera planting roadside bombs or hauling weapons. And at the end of a shift the mission can be handed off to another UAV, allowing for 24/7 coverage.

Live video feed from UAV cameras is beamed to commanders on the ground and around the world because they typically are flown via satellite link by operators stationed in the United States.

D-M has been home to a Predator unit since 2007. The Air National Guard's 214th Reconnaissance Group now flies missions around the clock in Iraq and Afghanistan from its quarters at the Tucson base.
In perhaps a sign of how high demand is, 214th personnel were too busy flying Predators to be interviewed for this story.

To meet soaring requests for the Predator's services overseas, the Air Force is funneling hundreds of young pilots straight out of flight school into UAV units. The service also is training officers who aren't pilots to fly UAVs and is looking at allowing non-officers to fly some of them.

Finding enough UAV operators may be challenging since the job doesn't have the allure of manned flight, said analyst Lawrence Korb, a former assistant defense secretary who oversaw military manpower and reserve affairs during the Reagan era.

"To fly a plane twice the speed of sound and come in for attack with missiles flying, there's a certain amount of glamour to that," said Korb, now a senior fellow with the Center for American Progress, another Washington think tank.

"There's not much glamour to sitting in Arizona or Nevada pushing buttons, even though it's just as important."

Mathewson, a former F-15 pilot, said one factor that's come up in Pentagon discussions is the possibility of reduced environmental impact — less aircraft noise, less need for jet fuel and other military pollutants — at U.S. bases where pilots train to fly by remote control.

Some snags must be ironed out, though, before UAVs could take to American skies in areas where civilian airliners fly.

The Federal Aviation Administration, for example, has resisted the idea, concerned that public safety might be compromised without human pilots on board.

It's too early to say what impact more UAVs could have on the future need for Air Force bases and personnel, or how much money might be saved, Mathewson said.

Today's UAVs cost far less than manned fighters — $5 million for a Predator compared to $85 million for a Joint Strike Fighter — but they don't have anywhere near the same capabilities. Future UAVs may have much higher price tags as they become more advanced, he said.

As unmanned aircraft mature, certain jobs now handled by humans — bomb loading, ground refueling, some basic flight-line maintenance — could be automated. And, eventually, UAV operators may be able to fly many unmanned craft at once for certain types of missions.

"That's where you would see some savings," he said.

Mathewson couldn't say whether D-M might be a future candidate for more UAVs. But a military consultant who has advised Tucson City Hall thinks it would make sense.

"If you look 20 years into the future, they could be based out of D-M," said Eugene Santarelli, a retired Air Force lieutenant general and former D-M wing commander. "With the geographic location of D-M and the (Barry M.) Goldwater range nearby, it could be a good fit."

As the future unfolds, pilots like D-M's commander will be watching and pondering the implications — both practical and ethical.

"Are we moving toward a battle space devoid of human beings? And, if so, how will that impact a nation's willingness or reluctance to wage war?

"While we are having these technological developments, we can't be afraid to couch them in some larger philosophical discussions about what war is, and what war will be."