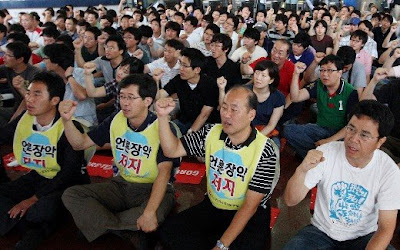 * Image source/ description: same as below:
'MBC union members are on strike to protest against the ruling Grand National Party’s plan to pass a bill amending the Broadcasting Law at its headquarters located in Seoul’s Yeouido, July 21.'

The Hankyoreh Media Company
Media workers stage general strike to prevent Broadcasting Law revision:
KCTU announces the beginning of their strike in solidarity with workers in broadcasting companies who have stopped their work to join in the NUMW strike
Posted on : Jul.22,2009 12:05 KST

NUMW announced, “Around 13 thousand media workers will participate in this struggle to frustrate maneuvering by the ruling Grand National Party to suffocate democracy and freedom of press.”

All except the 200 YTN union members necessary for remaining on air also held a ceremony to begin their strike.

After wrapping up their ceremonies for their union branch, union members went to gather in front of the National Assembly to participate in the NUMW’s ceremony for launching the general strike at 3 p.m. of that same day. The unions of SBS, CBS and EBS have also joined in the general strike.

The KCTU held a press conference in the same location to announce their general strike in solidarity. KCTU said, “We will stage a general strike beginning on July 22 in order to block Lee Myung-bak’s vicious law revisions from passing, including the bills to revise both the Broadcasting Law and the Irregular Worker Law.” KCTU is also demanding the normalization of relations between labor and Ssangyong Motors management.

http://english.hani.co.kr/arti/english_edition/e_national/367179.html
Ssangyong Motors confrontation continues:
As police move in to occupy the auto plant’s headquarters, industry analysts point to receivers for prolonging the struggle with the union over company’s recovery plan
Posted on : Jul.22,2009 12:08 KST
Posted by NO Base Stories of Korea at 5:39 AM