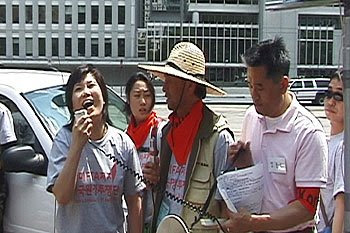 Today, July 25, 2009 is the 1st anniversary of the death of the Korean American activist, Jeong, Yoomi who got the diagnosis of the stomach cancer in 2006 during the struggle against the US-SK Free Trade Agreement and who passed away on July 25, 2008 as her beloved American husband Johnny Kline had devotedly kept her. She was a deputy secretary-general of the Korea Truth Commission and highly contributed to spread the truth of the Korean war to many international friends.

We, the Koreans and Korean Americans deeply remember all her humanity and devotion for the peaceful reunification of the Korea and international solidarity for peace.
Her death was a great loss for all of us but we, also know she remained us the task of continuing her struggle.

She has passed away. But she would be present inside us for a long time as many noble people have been.

http://www.iacenter.org/korea/jeong073008/
IAC Message on Jeong Yoomi
From the message of the International Action Center
July 30, 2008