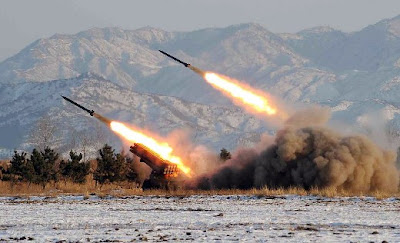 The Joint Chiefs of Staff said Sunday that North Korea fired off two missiles from its Gitdaeryong missile base near Wonsan, Gangwon-do at 8 a.m. Saturday. It then fired off one missile each from the same location at 10:45 a.m., 2:50 p.m., 4:10 p.m. and 5:40 p.m. A government official said that all the missiles fired were short-range ballistic and not cruise missiles, and were in violation of United Nations Security Council resolutions 1695, 1718 and 1874.

All seven missiles reportedly traveled a range of 400 kilometers (km) to 500 km. Five of the seven missiles landed in the same spot, some 420 km from the launch site, and analysts interpret this as a sign that North Korea has improved the accuracy of their short-range missiles. A military source said two or three of the missiles are presumed to be Rodong missiles flying very fast with a reduced range, while the other four or five appear to have been Scud-C missiles. He said Rodong missiles, which can travel a range of 1,300 km, could have their range reduced with an increase in firing altitude.

North Korea had also fired four short-range missiles from its Sinsangri base located between Hamhung and Wonsan on July 2. An intelligence official says the July 2 launches were part of a regular military exercise, but the July 4 launches were likely done with a political objective in mind.

Some analysts are saying it appears North Korea is trying to demonstrate its will not to surrender to moves by the U.S. and the international community to place sanctions on the country by firing off a barrage of rockets on the U.S.’s Independence Day. On July 5, 2006, North Korea had fired off a long-range Taepodong 2 missile, yet it appears that this time around, rather than launching a long-range missile in an attempt to create a stir, North Korea adjusted its tactics and opted for a low-intensity measure of firing short-range ballistic missiles instead.

This month’s launchings are the first firing of a ground-to-ground Scud-type missile in three years, since North Korea fired missiles on July 5, 2006. North Korea has since been firing ground-to-air or ground-to-sea missiles. All of South Korea falls within the range of a Scud missile, while parts of Japan fall within the range of a Rodong missile. Some analysts say the recent deployment of both missiles signals a warning through a show of force at not only to the U.S., but also a “realistic threat” against South Korea and Japan.

Regarding North Korea’s firing of 11 missiles, four on July 2 and seven on July 4, a South Korean government official said North Korea may be intending to either worsen the crisis with the timing in mind, or verifying their missile capabilities through these test-firings with exports in mind.

Others are pointing out that North Korea could launch more missiles to further increase tensions with the upcoming 15th anniversary of the death of Kim Il-sung (July 8) and anniversary of the Korean War armistice (July 27) approaching. However, there are reportedly no unusual movements detected at this time at North Korea’s long-range rocket bases of Dongchangni in Cholsan-gun, Pyonganbuk Province or Musudanri in Hwadaegun, North Hamgyong Province.