Text fwd: [No Bases: On Status Of the Forces Agreement, Korea] Query re immunity of troops on bases 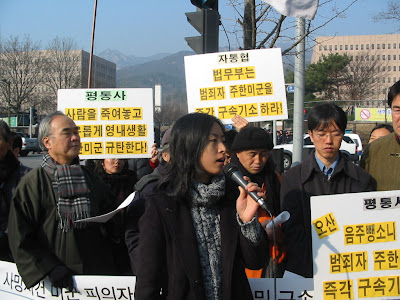 Below is the quotation from the E mail from Youkyoung Ko to the No bases on July 31, 2009

This is youkyoung from Korea.

I attached some materials.[Linked]
Could you tell me about service members' status in Colombia now without their bases and installation. I think there was the agreement about US service members and civilians' status regarding criminal. And that agreement should affect the negotiation.

In Korea case, roughly speaking, US have tried to evade their service member's standing in Korea court. They delayed intentionally the negotiation of SOFA after 1953 when the mutual defense agreement between ROK and US was signed and US forces stationed in peninsula by that until 1966. After the negotiation for revising SOFA began in Nov. 1995, US broke off over the transom in Sep 1996. In Aug 2000 the negotiation resumed and in Dec 2000 ROK and US reached the revision.

Before the US and ROK sat the table, there were always incidents, criminals, victims, people's struggles.

Last year my organization published a book in celebration of the 15th anniversary.
I wrote the history of US forces crimes and people' struggles in the book.
I think it would be helpful but we have only Korean version.
If someone want to translate the article to English, please refer to this site. http://antiusbase.tistory.com/

I could not translate correctly the name of charges and legal words in the file "Statistics-1967-2007".
It is not clear so it would be just reference.
The attached file "The history of Criminal Jurisdiction on US service members in ROK" is the information of the agreements.

This articles may be helpful.

1. Understanding the United States through the Crimes Committed by its Troops in Korea
http://blog.peoplepower21.o

2. The Status of Forces Agreement (SOFA) in Korea Reasons for Revision
http://blog.peoplepower21.org/English/8503

Hope this help,
You Kyoung, Ko'

* You Kyoung Ko is the director of the "The National Campaign for Eradication of Crimes by U.S.Troops in Korea"[ Check Emglish on the top right"]

As you may know, the governments of Colombia and the United States are currently negotiating the presence of five military bases in Colombia. On of the issues being debated is that of immunity for U.S. uniformed soldiers as well as civilian contractors. The question that has come up is [whether] there are other countries in the world where U.S. soldiers or civilian personnel contracted by the US military who do NOT have legal immunity for crimes committed in the ‘host nation’s territory.

If you have information about this, could you please contact me?

For further information on the current negotiations for bases in Colombia, see
Revamping Plan Colombia
http://fpif.org/fpiftxt/6283