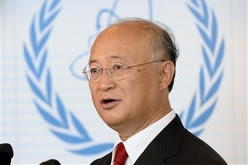 * Informed in Informationclearing house
* Image source: same as below

Israel privately heaved a sigh of relief Thursday at the election of Japan's Yukiya Amano to replace Mohamed ElBaradei as head of the International Atomic Energy Agency (IAEA).

The relief comes both because the tenure of ElBaradei, with whom Israel has had a rocky relationship, is about to end, and because Amano beat out South Africa's candidate, Abdul Samad Minty.

While officially Israel had no comment on the development, privately, government sources said Amano was Israel's preferred candidate.

He also said the expectation in Jerusalem was that Amano would be more "neutral" than ElBaradei was when it came to Israel's concerns.

Amano won 23 of the votes at IAEA headquarters in Vienna. One delegate abstained from the vote and the remaining eleven voted for Minty.

Amano, 62, appealed for "solidarity of all member states," and touched on the devastation US atom bombs wreaked on his country in pledging to do his utmost to prevent the spread of nuclear arms. His allusions to the bombings of Hiroshima and Nagasaki pointed to a deep commitment to non-proliferation.

While Amano and Minty were believed to have equivalent technical expertise for the job, South Africa's relationship with Iran is very problematic from an Israeli perspective. For instance, in 2006, when the IAEA finally decided to report Iran to the UN Security Council, South Africa was one of five countries, alongside Libya, Algeria, Indonesia and Belarus, that abstained. Only Cuba, Syria and against.

At the time, South Africa was considered among the most reticent of non-Arab or Muslim countries to join in international condemnations of Iran.

The reasons given for the degree of coziness between Iran and South Africa include historical and business relationships.

Iran was a big backer of the African National Congress during its fight against apartheid, and Iran provides South Africa with cheap oil.

When asked by others who Israel supported, the government source said Jerusalem had not hid the fact it preferred Amano.