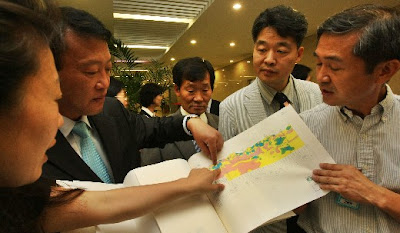 Image Source/ Description: same as below

‘Cho Seung-soo, a lawmaker with the New Progressive Party, and members of the Environmental Movement in Gyeongju City announce the results of a study on the nuclear waste disposal facility currently under construction in the Gyeongju area at the National Assembly, July 28.’

YangLee Won-young, the head of KFEM’s Future Planning Department said, “The government selected the site only four months after the site’s assessment had been conducted, and despite indications of several safety problems, including the instability of the base rock.”

They shared the findings of three-related site reports including, “An assessment report on the nuclear waste disposal facility site” by Korea Hydro & Nuclear Power Co., LTD in April 2005.

The Ministry of Knowledge Economy responded with a press release that says, “We conducted a fact finding investigation into the 30-month delay of the facility’s construction, however, we believe there are no problems related to the site’s safety and find the site’s assessment study to be appropriate.”

They government had conducted a four month long investigation into the proposed facility site in Gyeongju city located in South Gyeongsang Province, and the city was selected to host the construction of a facility that would be capable of storing low and intermediate level radioactive waste materials through a local referendum that took place in November 2005. The Geological Society of Korea conducted the study into causes of the construction delay at the ministry’s request in June.