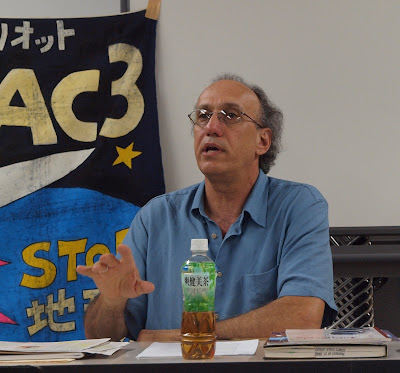 It's hot, it's muggy, it's been raining, and folks are treating me wonderfully. I've been in Kyoto for two days with little Internet connection. The first two nights I stayed in a traditional wooden Japanese home where I slept on a futon on the floor - Japanese style. But sadly their wireless connection didn't work so I've had to move to a hotel where I will spend the next two nights. I get hundreds of emails each day and find it impossible to be without Internet for long. A friend in California calls my laptop my "altar."

I've been taken to a couple local wonderful spots including the Kiyomizu Dera Temple that overlooks the city from the base of a surrounding mountain. Just a spectacular place. Kyoto is famous for many temples and the city is crawling with tourists from all over the world.

Last night I spoke to 70 people and after I talked a 3rd generation Japanese-born man of Korean ancestry spoke. I was surprised to learn that even when Koreans are born in Japan they do not automatically get citizenship. There is still discrimination here against Koreans, many of whom were brought to Japan during imperial times as virtual slave labor. Lee Tong Il spoke out in favor of North Korea's right to defend themselves from an aggressive US and Japan. He said, "For 60 years the US has brought nuclear weapons to the Korean Peninsula so North Korea has to have nuclear weapons to defend themselves."

While I am opposed to all countries having nukes I must agree with his basic point that the US position is hypocritical because our nation has more nuclear weapons than any other country and we continually test them. (August 23 is the next planned US Minuteman nuclear missile test fired from Vandenberg AFB in California that will land at Kwajalein Atoll in the Pacific.) North Korea sees Iraq and Afghanistan get invaded, Iran threatened, and they figure their only chance for survival as a nation is to arm themselves as well.

The big issue in Japan right now is whether or not the government should get rid of Article 9 of their Constitution that says they will not have an offensive military. Prior to WW II Japan invaded Manchuria and occupied Korea. Their colonial empire spread throughout the Pacific Region. The right-wing in Japan wants to get rid of Article 9 and is even calling for preemptive attack on North Korea. This stirs fears in the region about a resuscitated imperial Japan, coupled with a massively armed imperial US, a clear prescription for disaster.

A key part of all this current trouble is the US "missile defense" program which is now being deployed in Japan, South Korea, Australia, and on Navy Aegis destroyers surrounding China. After my talk last night several people thanked me for my clear explanation how the US "missile defense" program is really part of a broader offensive first-strike attack program - the sword and the shield together.

Bottom line is that the region is a trip wire for war. Thank goodness that there is an active and strong peace movement here.