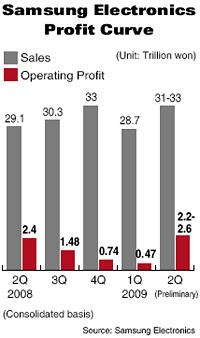 * Image source: same as above

Samsung Electronics is expected to see its second-quarter operating profit to soar fivefold from the first quarter.

Since Samsung is often regarded as the bell-weather for the economy, its performance may be a harbinger of a recovery in other sectors.

According to Samsung officials and analysts, its quarterly operating profit will reach between 2.2 trillion won ($1.7 billion) and 2.6 trillion won.

The estimate by far exceeds the 470 billion won recorded for the first-quarter on sales of 28.67 trillion won.

In a regulatory filing, it reported its April-June sales as between 31 trillion won and 33 trillion won.

The consolidated numbers include performances from overseas affiliates and are preliminary, according to the Suwon, Gyeonggi Province-based company.

Explaining the gap between the projection and the real figure, Samsung said its first-time earnings guidance was conservative but reflected the economic situation at that time.

Samsung will announce its second-quarter earnings on July 24. It plans to make public preliminary earnings estimates ahead of official announcements for the coming quarters.

"Steady cost-cutting efforts, solid leadership in mobile phones and an increased global share in TVs paid off," Citigroup said in a note to clients.

"Samsung's components businesses — memory chips and LCDs — will show a strong turnaround in the second quarter, raising hopes for the continuation of brisk performances," the U.S.-based brokerage said.

Company shares have risen 39 percent so far this year, outperforming the 27-percent average advance on the main KOSPI.

Tech firms are looking at an up-tick with the global economy showing signs of recovery.

Samsung's bottom line in the recent quarters has been dented, due to a slump in memory chip prices, and sluggish demand for consumer products from televisions to mobile phones.

Although some analysts are skeptical whether Samsung's strong forecast signaled a full recovery for IT-related industries, some key companies are also positive about their second- quarter earnings.

A spokesman of LG Display said the company will see a turnaround in profit in the latest quarter, while Hynix Semiconductor said the operating loss of the world's No. 2 memory chip company will significantly be reduced.

LG Electronics officials said it will post between 800 billion won and 1 trillion won in quarterly operating profits, on consolidated sales of 15 trillion won.

yckim@koreatimes.co.kr
Posted by NO Base Stories of Korea at 9:10 PM