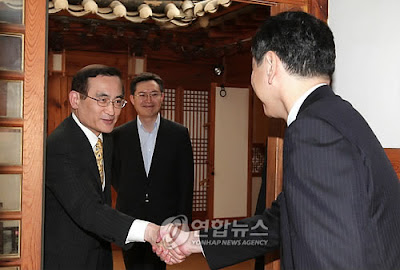 SEOUL, July 6 (Yonhap) -- The U.N. Security Council will soon discuss how to deal with North Korea's firing of ballistic missiles over the weekend, which violated the council's existing resolutions against the communist nation, South Korea's top nuclear envoy said Monday.

"The U.N. Security Council will discuss the matter. The level of its response remains to be seen," Wi Sung-lac told reporters after meeting here with his Japanese counterpart, Akitaka Saiki.

He said the North's test-launch of the ballistic missiles, seven in all, on Saturday clearly violates U.N. Security Council resolutions adopted after Pyongyang's missile and nuclear tests in 2006 and its second nuclear experiment in May this year.

Wi said his first face-to-face consultations with Saiki in three months focused on ways to counter the North's continued provocations.

"The two sides agreed on the need to faithfully implement U.N. Security Council resolutions 1718 and 1874, as well as continue efforts to resume dialogue (with North Korea) at the same time," he said.

Wi said ongoing diplomatic consultations for five-way talks are partly aimed at restarting the stalled denuclearization process. The talks would be among South Korea, the U.S., China, Russia and Japan, Pyongyang's dialogue partners in the six-party nuclear forum that North Korea is boycotting.

In a related move, Chinese Vice Foreign Minister Wu Dawei, who chairs the disarmament talks, is scheduled to visit Seoul from July 12-14 as part of a regional tour. Wu visited Russia and also plans to travel to the U.S. and Japan. It is unclear whether he will visit North Korea.

The South Korean negotiator, however, cautioned against expecting an immediate breakthrough.

"It is still too early to predict concrete progress. We are not in a stage yet to produce tangible results," he said.