Text Fwd: Pentagon Looks to Use Drones For Missile Defense 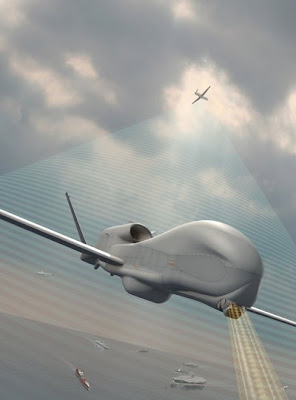 Pentagon Looks to Use Drones For Missile Defense

By studying the missile in its early stage of flight, the drones could provide data that would allow the incoming weapon to be destroyed, said Lt. Gen. Patrick O'Reilly, head of the Missile Defense Agency.

The agency illustrated this advantage in April when it used a MQ-9 Reaper unmanned aerial vehicle to "observe" a target. Its sensor technology, which has drawn fire from some critics for being too narrowly focused, appears to be particularly effective for stalking launch sites and studying missiles as they begin their trajectories, so long as the drones are told where to look.

The Reaper's electro-optical/infrared sensor "has proven to be extremely accurate and extremely sensitive," O'Reilly said. "So, there is very little modification we see that will be necessary to the [drones] themselves."

He added: "It gives you a great capability from hundreds and hundreds of kilometers away to be able to view a missile launch and actually track it and provide data to our shooters to intercept."

The Reaper is one of several projects aimed at monitoring enemy missiles just after launch (Amy Butler, Aviation Week, July 15).